Ok, one last post on Regression to the Mean 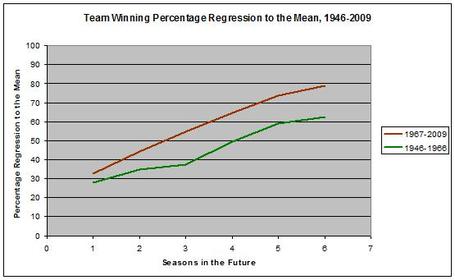 What you can see is that team winning percentage was a lot more persistent back then, before the NHL instituted its entry draft. The difference isn't huge - for a .600 team in Year 0, it amounts to a little over a win in Year 3 - but it's there. The post-1967 curve shows that it's much more difficult for teams to stay bad for extended periods of time - aside from the Toronto Maple Leafs, who somehow managed to be the only NHL team to not have a winning season in the 1980s.

The difference in regression to the means is also part of what made it possible for four NHL teams to win 20 out of 21 cups between the end of WWII and the NHL's expansion. The odds of that happening, or of four teams winning all 21 cups, by luck alone is approximately 3.5%, while the odds of the Chicago Blackhawks actually being cursed are somewhat lower.