He hasn't really played much, but let's take a quick look at Hutch's work so far this season.

In case it isn't clear, I don't really understand why Michael Hutchinson was pulled so early in his first and only start this season. His lack of ice time means the numbers for Hutch can't really be read into all that much but nonetheless, here they are for you to look at and overanalyze.

Well these don't look very pretty. I mean, that special teams save percentage is pretty nice?

Seriously though, this is a scratch over one period of a sample size. Hutch really hasn't been given much of a chance to do anything this season, and I think the hand he was dealt really played into that one period performance.

See what I'm talking about here in regards to "shaky defence"? Two of the three goals (admittedly, one of which he probably should have stopped) scored against Hutch came in odd man rush situations. That's not really easing your young goalie into anything.

If there was one thing that was at all concerning to me throughout the preseason and into this game, it was Hutch's rebound control. I don't necessarily recall this being a red flag in his stint with the Jets at the end of last season so it really could mean nothing, but it is something I would like to see cleaned up as he spends more time in the NHL. I do have concerns about this though, as we have already seen many of Ondrej's Pavelec's tendencies stick around throughout the years. Does Wade Flaherty really have the ability to teach a goalie to change and adapt to a higher level of play? I really do not know.

Open net goals occur usually in response to two occurrences. A goalie being out of position, a trend we see with Ondrej Pavelec far too often, or a goalie who struggles with rebound control. Now it's a small sample size and I refuse to get worked up over this, but it is something worth pointing out. Hopefully Hutch can reign in those pucks a bit better in the future.

The first goal I'll break down today shows a bunch of things happening that really aren't common characteristics from some of the Jets best players, and also show the value in keeping control of the puck rather than dumping it in.

Let's start from the beginning. The Kings gain a controlled entry into the Jets zone. From a Jets standpoint, everything here is perfectly fine. He is outnumbered 3 on 1, young stud Jacob Trouba is doing his stuff, Stuart doesn't seem to have anything to screw up, there really is nothing here to worry about.

That is of course, until Blake Wheeler decides to get a little aggressive with things. Trouba seems to have everything under control. The Jets still have the Kings pretty handily outnumbered, there really isn't a threat. My best guess is Wheeler wanted to create a turnover (limit puck possession time for the Kings), so he took a risk. The problem with that though, is he leaves his point completely uncovered and free for some relief from the pressure.

In a split second the Jets went from having complete control of the play, to "HOLY CRAP THAT'S DREW DOUGHTY ALONE WITH ROOM" mode. You don't usually want to enter that mode. That mode rarely ends well. In this particular case, it forces Ladd to commit in order to attempt a recovery for Wheeler's failed attempt.

Ladd having to recover suddenly has both Jets covering Doughty, and Carter is about as open as one can be in the NHL. He's so open that I decided to count this as an odd man rush situation.

I'm sure by now you're wondering. Why do the Jets only have four guys on the ice? How was Doughty so wide open? Shouldn't someone be pressuring.... oh wait... what's that I see coming in from the right?

Yup. That would be Bryan Little. Be very un-Little-like in this case and really not back checking much...

Not that this needs to be pointed out, but Carter is pretty wide open at this point. Hutchinson actually does make the initial sprawling save here. Meanwhile, it looks like Little has yet to take a stride...

The Jets then all get tangled up trying to find the puck, but the Kings hunt it down and put it in the open net for the goal. This isn't exactly the type of defensive play we have seen from the Ladd - Wheeler - Little unit before, and it's something the Jets will need to change if they want to see any kind of sustained success going forward this season.

Here I present episode two of Zach Bogosian: What the Heck are You Doing?

Let's start with the good stuff. Bogosian is clearly paired up with Kopitar in this circumstance and seems pretty determined to stick by his side no matter what.

Kopitar quickly identifies that there is very little chance the Kings will end up with the puck along the boards. He heads over to supply a bit of support, and Bogosian follows him. I'm not sure if this was really necessary as I don't see Kopitar as much of a threat in this situation, but everybody appears to be decently matched up. The Jets should get the puck turned over here, and get it out of the zone.

Well, long story short they didn't. The Kings manage to win the puck battle and get it out to the point man, and things start to fall apart for Bogosian and company.

You see, Bogosian for some strange reason left his general area and followed Kopitar up to the top of the circle. Due to this he completely losing his positioning and Kopitar has a pretty clear lane to the net following the attempted point shot. He actually continues on from here without being touched by Bogo.

Meanwhile, Gaborik has also worked over and gained some pretty solid positioning on Bryan Little as he heads to the net.

The shot comes to the net, and by this point it's pretty clear that if Hutch can't handle it he's going to have two very talented hockey players right there to create something.

As I'm sure you guessed, Hutch wasn't able to control the shot and the rebound ended up right on Gaborik's blade. He rapidly shuffled it over to Kopitar (still not touched) who pots it into the open net. It was actually a very impressive play by Gaborik, but it never should have happened. The Jets lost a battle, lost their positioning, gave up a rebound, and got scored on.

Now this goal I will say up front Hutchinson probably should have had. What I want to show you here though, is how defensemen shouldn't play when you have a rookie forward, Chris Thorburn, and a rookie goalie on the ice all at the same time.

Looking at the slider below, I want you to see the decision Stuart made in the offensive zone. The Kings pretty clearly have the puck, and support to make sure it is going to get out of the zone. The smart play here is very clearly to back away and prevent an odd man rush. Yet for some strange reason, Stu decides it would be a perfect time to go in for the big hit. 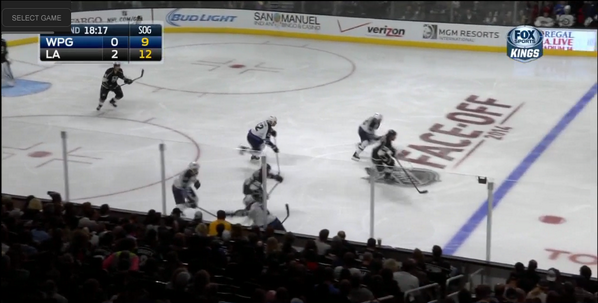 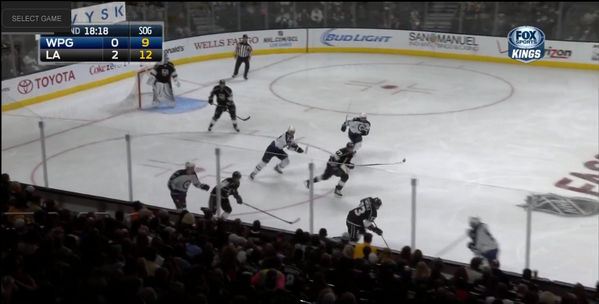 Luckily for Stuart, Mathieu Perreault busts his butt and gets back to help out Trouba. This forces the Kings into a shot that's easily blocked and the puck leaves the zone.

But wait! Now it's Jacob's turn! Less than 10 seconds after this near miss, Trouba gets a little to aggressive going after a loose puck. He gets caught, and once again the Jets are caught in an odd man situation.

The Jets don't get off so lucky this time. The shot comes, and unfortunately Hutch doesn't squeeze it enough. Goal. Hutch then gets pulled, and at this point you have to believe it to be a mercy pull for the young goaltender.

Now Ondrej Pavelec has played decently this season and I'm sure that has played into why Hutch has yet to see the net again, but it can't do much for the kid's confidence that he hasn't seen any time since this game. I would like to see him get one of the two games this weekend, and hopefully get him feeling more comfortable in the net. This sample (and the Jets defence in this game) makes it way too hard to draw any sort of conclusions off of Hutchinson's play thus far, so please don't get down on the guy. Give him time. We all know Pavelec's been given plenty of that.