What better way to spend a Saturday in New York City than in cuffs?

Share All sharing options for: Evander Kane has some fun on Instagram while touring New York City

Despite suffering a lower-body injury that kept him from returning in the Winnipeg Jets' 2-1 loss to the Philadelphia Flyers on Friday, Evander Kane was still in good spirits upon his arrival in The City that Never Sleeps.

Kane's ailment kept him from participating at this morning's Jets' practice held at the historic outdoor rink at Central Park before Monday's game against the New York Rangers.

Or was his absence related to the reading of his rights?

The Jets' forward took time out of his Saturday afternoon to post the following photo to his Instagram profile in which he's being cuffed by one of New York City's finest. 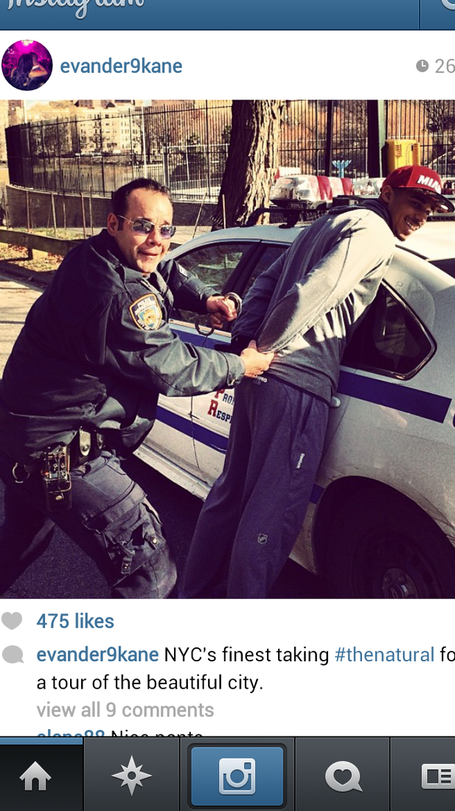 Was Evander caught up in a Steve Sax-like run-in with the law? Perhaps we'll never know. But we have become increasingly aware that Kane loves working it for the camera, showing his fans a side of himself that many NHLers wouldn't dare dream of.

Undoubtedly, those who continually rail against Kane will now take to their pedestal to bemoan his antics -- particularly after a woeful road loss -- calling him selfish, immature, [insert common rhetoric here]. Feathers will be ruffled, feelings will be hurt.

Evander let me take this moment to say that I hope you never change. Keep doing you. You're a grown man getting paid millions of dollars to play a child's game, yet your detractors choose to get mad about this? Like you always say, #RayCharlestothehaters.

Stick tap to @knoxvle for bringing the photo to our attention.