Tim Thomas was the only Boston Bruin not to go to the White House to meet President Obama. This has caused a bit of upheaval in the hockey world, at least south of the border. 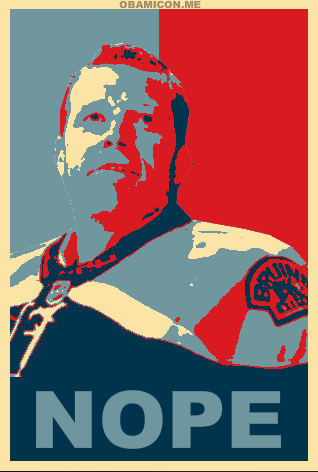 Good on Thomas for using this moment — where a professional sports team participates in what's both an honor for their accomplishments and a political photo opportunity — to make a political statement of his own. ~ Puck Daddy.

I completely disagree with this line of reasoning and I'll explain why after the jump.

Mixing sports and politics or religion for that matter is toxic. It is dumb. It sucks the fun out of being a fan of a team and should scare you to death if you want to articulate a political view in a religious atmosphere. I wish I never knew Tim Thomas' political leanings, I didn't before today.

Now I know that he never wanted to be a Goalie, he has always wanted to play Right Wing.

To suggest, as Puck Daddy does, that professional athletes should start advocating political positions is treacherous water to be in. Like taking LSD and going water skiing in shark infested waters while wrapped up in raw bloody T-bone steaks. Nothing good can come of it; although it may be amusing to watch from the boat.

Because fans are from all political spectrums and beliefs. Ultimately players like Tim Thomas play this game for us. Yes, professional sports are for you and me. The fans who pay the dollars, follow our team faithfully (see how I did that) and worship our favorite players (see how I did that again).

Somewhere in Boston today is a tormented Boston Bruin kid holding his Tim Thomas jersey and his faded Obama Hope T-Shirt crying. He is in a state of mental anguish. Now why would you want to do that to some little Boston Bruin fan?

Shame on you Timmy...

Professional athletes should be as neutral as possible on religious and political issues.

It is simply a prudent course of conduct given the diverse fan base. I have been biting my lip all through the whole Tim Tebow circus. As a sports fan it creates a sideshow to your own team and as much as such public displays of prayer may help Tebow personally, they must have distracted his teammates.

Can Tebow not silently offer up his prayer with out the big knee and thinker pose?

If he can't, well, it is a free country and let him go to it but it will not play out well when the Broncos start losing and the inevitable "God hates the Broncos" jabs start circulating at Denver fans.

God doesn't hate the Broncos, he is just a hockey fan. 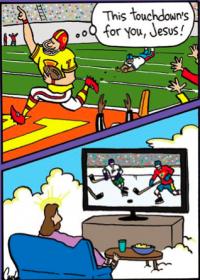 Politics is just as treacherous an arena for an athlete to enter into. Canadians are largely oblivious to how explosive political debate can get in the United States. I was anyway, until I moved down here. The level of sophistication of political policy discussion plummets south of the border, plummets to levels that are very difficult for someone who is used to Canadian political commentaries and policy debates.

This isn't elitist from a Canadian perspective either, it is simply a cultural difference. The reality is that 48% of Americans did not even vote in the last Presidential election, they seem to have detached from their politics but those who have remained engaged have the debate on high volume and high rhetoric. Meandering into American political culture from another democratic country is shocking.

When you see two people screaming at each other and gesturing madly, you back away. In Texas you actually duck down and back away slowly and maintain cover.

Now Tim Thomas is an American, I can't imagine any Canadian hockey player snubbing the President of the United States, it simply isn't polite to refuse an invitation to someone's house. Especially one that we burned down back in 1814 during the War of 1812.

If Tim Thomas had been Canadian he would have likely bit his lip and accompanied his team to the White House regardless of his political leanings and there would be no story here today. He didn't and you know what? That is fine. What Tim Thomas did today is largely part of how many Americans define themselves and their freedoms.

Tim Thomas and Tim Tebow are Americans and they have the freedom to do what they want in thier country even when it strikes many of us non-Americans as tactless or as Quebecers might put it, a faux pas in Canadian culture.

It is not something I would personally have done, not something I advocate but they are not the first Americans, nor will they be the last to take their freedom and act as they are inclined to personally, regardless of the consequences to others.

They will act according to their own individual beliefs and Canadians may have a little trouble processing that but it is part and parcel of what it is to be American. Part of the significant cultural difference between the two countries, something that many overlook.

I believe the Federal government has grown out of control, threatening the Rights, Liberties, and Property of the People.

This is being done at the Executive, Legislative, and Judicial level. This is in direct opposition to the Constitution and the Founding Fathers vision for the Federal government.

Because I believe this, today I exercised my right as a Free Citizen, and did not visit the White House. This was not about politics or party, as in my opinion both parties are responsible for the situation we are in as a country. This was about a choice I had to make as an INDIVIDUAL.

This is the only public statement I will be making on this topic. ~ Tim Thomas, January 23, 2012

So there it is.

The man has the freedom in his country to take a position and he has. For those who say that he is acting classless and without manners or respect for the Office of the President and so forth, I would respond that in America, Americans have the right to respect, disrespect or completely disregard their politicians and they are pretty passionate about it.

Tim Thomas did not spit on the President of the United States today. He did not walk into the Oval Office, drop his pants and defecate on the rug. He did not swear or yell at him, he refused to accompany his team to the White House and he made a political statement today on Facebook, which really is probably not that far off what many other Americans think.

Would most Canadians have done this? Probably not but Tim Thomas is not Canadian he is an American and in his country the balance between exercising individual freedom with tact and sensitivity to the feelings of others is not even on the radar.

These are two different cultures.