Share All sharing options for: Shift Length Change since 1997-98

The NHL has been collecting detailed ice time statistics since the 1997-98 season. One interesting thing that we can see is a shift in individual shift lengths: 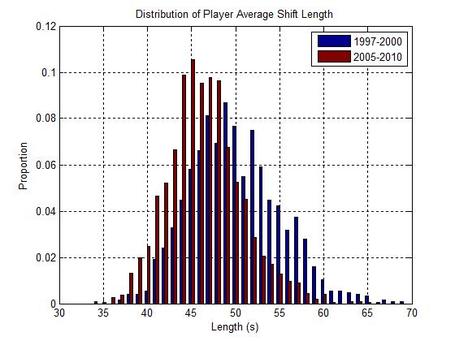 It's unfortunate that we have barely one decade worth of data, but I imagine that shift lengths have been dropping for decades - in the 1980s, I believe 60 seconds was the league average. Some of that happened as rosters increased to the modern size of 20, and it has kept going as players have become fitter and talent more equally distributed throughout the league.