The Jets didn't have their strongest showing, but they pulled out the win.

Share All sharing options for: Fenwick Timeline: Jets vs Devils

Here is the Fenwick timeline for the Winnipeg Jets vs New Jersey Devils on Febuary 28th, 2013: 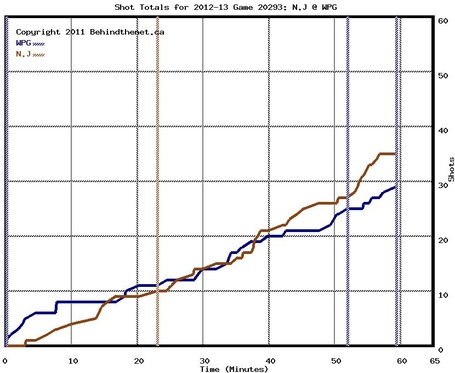 Selling Your Soul For A Win:

The Jets started the game in dominant fashion, but really struggled to sustain it. Perhaps the fact that the Devils were rested caught up to them. Perhaps the "first game after a road trip" thing got in the way, but the Jets were handily outplayed down the stretch.

After a long stretch where the Jets lost games that they should have won, they've started winning games they probably shouldn't. The numbers (apart from Ladd's shooting %) have largely evened out, so it will be interesting to see what happens next.

The Jets are a middling team in just about every statistical category, so where they go from here is almost all on Pav and their special teams units. Pav needs to find consistency and the powerplay needs to get rolling. Hopefully it can.

If want to check out the Fenwick info, player by player, Alex Hemsky made it available here.