They Jets fell apart late and special teamed away a "could be" victory, but how did it look on the chart?

Fenwick Timelines!! Many number munchers around the web will tout the value of Fenwick and Corsi when analyzing hockey. It tends to be the best long term predictor of future success and can offer a nice snap shot of just how effective a team has been.
Now before you turn off your brain and say "advanced stats are stupid", Fenwick is simply shots, posts and missed shots added together and it generally goes hand in hand with offensive zone time.
Now for your Winnipeg Jets: Thanks to some awesome work by Arctic Ice Hockey overlord Gabe Desjardins, via his hockey nerd haven www.behindthenet.ca individual game tables, so let's get at it!
Here is the Fenwick timeline for the Winnipeg Jets @ Philidelphia Flyers on Febuary 23rd, 2013: 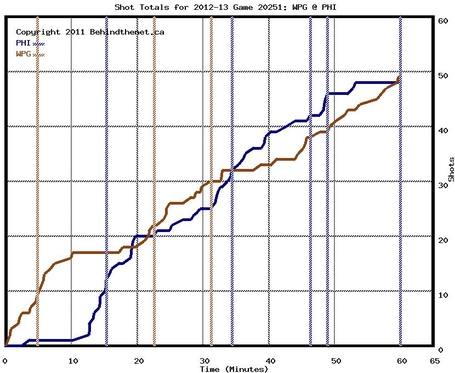 Flying In A Downward Spiral:
The Jets were once again sharp early. The Winnipeg Jets outright dominated the first 10 minutes, but vanished over the next ten. The game was pretty even from there on out. All in all it was a pretty good showing apart from the penalty kill. This looks like a game that the Jets should have won, but special teams disasters will happen every now and again.
If want to check out the Fenwick info player by player, Alex Hemsky made it available here.

2013 Game 17: Winnipeg Jets not so special against Philadelphia Flyers, lose 5-3