Take a look at the Fenwick timeline for the Jets vs Flyers game from February 12th. Spoiler alert: The Jets should have won this one!

Here is the Fenwick timeline for the Winnipeg Jets vs Ottawa Senators on Febuary 11th, 2013: 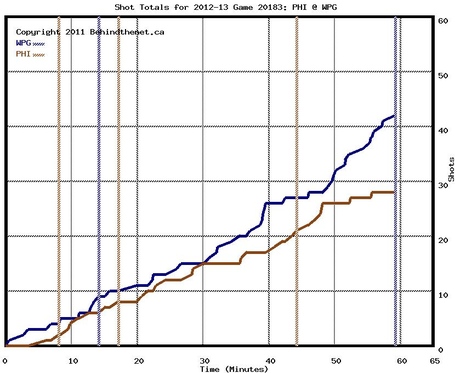 Nike Boots (Flyer Than The Rest of Em):

So, I have deduced that the Jets are pretty good at Fenwick, but not so good at winning. This game was another strong showing by the home side and probably one they should have won, but once again it was not to be. Was it as simple as Ilya Bryzgalov standing on his head? Maybe, but there could be more to the story.

The Jets were once again further ahead on in terms of Fenwick that they were the shot count. Missed shots were definitely a factor. I approve of mass shooting, but more of the mass shooting has to be on net. The numbers lead me to believe the Jets are a decent team suffering through some poor puck luck, but in a shortened season there isn’t much time to figure it out.

If want to check out the Fenwick info player by player, and you should because the Jets outright dominated, Alex Hemsky made it available here.