The Jets controlled the action for most of the game, but turned off the offense when they took the lead.

Here is the Fenwick timeline for the Winnipeg Jets @ Ottawa Senators on Febuary 9th. 2013: 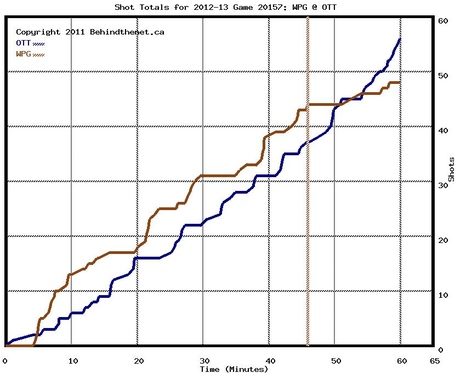 Sentors vs Centaurs: The Jets end the game with horse's ass hockey.

The Jets put together a strong road performance vs a team that has been playing well. For most of the night the Jets were the better team and it the Fenwick timeline illustrates this clearly, but once again the offense stopped when the Jets took the lead. The late drop off is shocking and it explains why so many players ended up in the minus on the end game Fenwick table.

Once again I have to wonder if this is the way the coach wants the team to play or if they really have a hard time when the opposition double and triple shifts their impact players. Everything worked out fine tonight, but you have to think they will get bit by this kind of down shift again in the future.

If want to check out the Fenwick info player by player, Alex Hemsky made it available here.