Share All sharing options for: Post-Game #FancyStats: Winnipeg Jets 3 vs Colorado Avalanche 4 (SO) 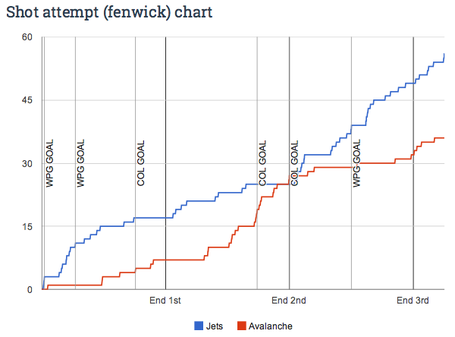 * I haven't done this for a while. I brought it back because I wanted to point out something... and exams are over.

* Remember: The Atlanta-five (Ladd, Little, Wheeler, Enstrom, Byfuglien) are bad, while the character three (Jokinen, Stuart, Thorburn) are who we want.

* In all honesty though, Jokinen has been much better this season; it isn't Thorburn's fault Noel is playing him on the second line; and Stuart isn't forcing Noel to play him over other players. I don't hate these players; they seem like good guys. I don't want them to fail. I don't enjoy beating on them. I just think though the narratives some construct around them about their effectiveness is absolutely ridiculous.

* Jacob Trouba had a great night. He had superb underlying numbers under tough usage, although they went crumbling down after Noel swapped Stuart and Clitsome.

* I honestly KNOW, not think, this team would be better with Eric O`Dell and Eric Tangradi in those two middle six leftwing spots over Thorburn and Halischuk. Those saying the team wouldn't be perfect are missing the point that any better, no matter how marginal, is huge in a league with so much parity.

* If you want to win, give yourself the best chance to do it. #FancyStats do that.