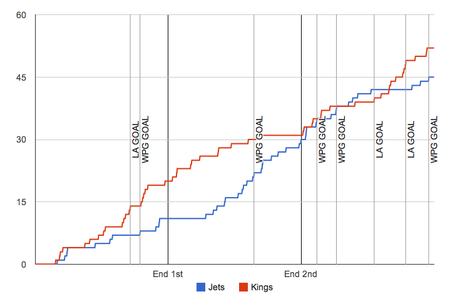 * Zach Bogosian and Jacob Trouba were used and abused tonight, although were probably being matched against the Justin Williams line (pro-tip: he's really good).

* Not too sure if having Paul Postma and Mark Stuart being used as defensive zone specialists is a wise move but so far the Jets have been winning.

* I agree with Claude Noel moving Eric Tangradi to the third line. More minutes with positive possession the better. Looks like the Winnipeg Jets could really have three decent scoring lines with this setup.