Percentages and Probabilities: Why Olli Jokinen will likely bounce back this season

We continue our discussion on probabilities and how variables outside of a players control affects their statistics.

Share All sharing options for: Percentages and Probabilities: Why Olli Jokinen will likely bounce back this season

Olli Jokinen had a cumbersome 2013 season with the Winnipeg Jets, his first after being acquired in the summer of 2012. In his 45 games with the Jets, Jokinen registered fourteen points (7G, 7A), earning approximately $321K per point while garnering the fifth most ice-time of any forward.

Last week we looked how natural variance affects all statistics. It was noted how sample size and the nature of the individual statistic are the leading factors of how much randomness is involved in a statistic. Because of this, different statistics become more reliable under a certain amount of games, which was previously calculated for traditional statistics (here at Arctic Ice Hockey, I might add!):

The two major trends to notice here are that there always is some natural variance (ie: "luck") in statistics and that traditional +/- is pretty terrible for individual analysis.

In the previous article we discussed how you can use regression to factor for randomness. Olli Jokinen had a very down year, so let's use the knowledge we've built up to look at Jokinen's traditional statistics and deepen our analysis of his first season as a Jet.

There is no controversy whether or not Jokinen's offensive production went down this season, with Jokinen producing at half his "normal pace". Some of it seemed to extend from a natural drop in offensive production with aging, which is reflected in Jokinen taking less shots and shot attempts per minute of icetime relative to his previous averages. However, it's interesting to see that the larger drop extends from his assist production, which extends from his teammates' production that occurred while he was on the ice, and not his share of said production.

We can visualize this by looking at Jokinen's personal non-blocked shot attempts compared to his team's when he is on the ice. 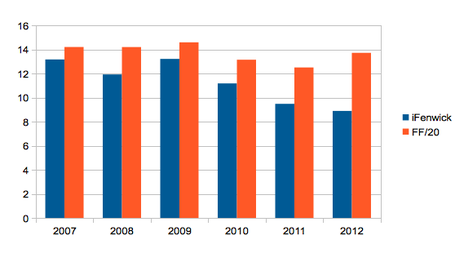 Again we can see that Jokinen's own offensive creation falling due to age and role change; however, we can also see that his linemates should have made up for some of this with their own scoring chances. The large drop in On-Ice GF/60 is actually due to a drop in On-Ice Sh% (the team's shooting percentage when Jokinen is on the ice) from ~7.9 to ~5.8. While some would say this is due to incompetence and/or aging, it has been shown previously how random percentages act from season-to-season and this is because variables outside of a players control plays a larger role than the individuals skill for the team's shooting and save percentages.

Here is a visual representation of Jokinen's point production being influenced by percentages and how random they are:

The % in the right are percent difference to Jokinen's career numbers (well 2007-13 since we don't have statistics for prior to 2007, so for the rest of this article career is defined as the 2007-13 portion). Instead of On-Ice Sv%, the negative value of opponents On-Ice Sh% is used so the Sh% can be equally comparable. PDO isn't as comparable due to its size but placed for interests sake.

If those shooting percentages don't look random, I don't know what does. Another interesting piece to note is that the largest drop in offensive production comes from Jokinen's primary assists.

Now for some fun with numbers. First we take the Jets' shot attempts per 60 minutes when Jokinen was on the ice; these were 56.4 shot attempts, 41.48 non-blocked shot attempts, and 27.1 shots on goal. We then normalize the Jets goals for using the on-ice shooting percentages of Jokinen's career, giving us three different possible goals for per 60 minutes. We then use Jokien's career point share and 2012 point share to have six different estimates of Jokinen's points per 60 minutes. We then take the second highest and lowest values (to reduce outliers), and multiply it by Jokinen's TOI to get a normalized point production:

These two normalized production outputs are essentially the upper and lower limits of what someone should expect with large confidence for Jokinen to get, given the amount of scoring chances he and his linemates created through out the year.

We see a similar pattern here. Jokinen experienced a huge drop in production (he did only get one assist). His shot attempts did not decrease significantly, although the ones that hit the net did. Some of that can be attributed to luck and skill; however, a lot likely also has to do with the change in Jokinen's usage during the power play. Historically, Jokinen has either been used as a one-timer option (like Dustin Byfuglien) or in front of the net (like Andrew Ladd), yet the Jets used Jokinen this season as the puck mover, quarterbacking the power play like Tobias Enstrom. In Calgary, Jokinen was never used as the primary puck carrier for gaining zone entry, which also changed in Winnipeg (without much success).

Here we can see how the Calgary Flames set up their power play with Jokinen: 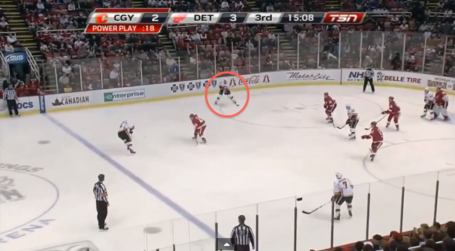 He's still one of the three guys up high; however, with Calgary he's being used as one of the two one-timer options for the quarterback. Sometimes Calgary would have Mike Cammalleri in that spot with Jokinen being one of the two players down low. Here's a link to all of Jokinen's power play points in 2011-12.

Here we can see how the Winnipeg Jets set up their power play with Jokinen: 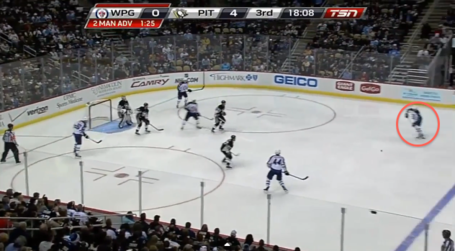 Note the terrible telegraphed pass Jokinen is sending to Bogosian...

The Jets maintained 3 players down low to try to pick up rebounds or deflections as well as two players up high: the shooter and the quarterback. While Jokinen is still a decent offensive player, he has never been known for being a savvy, high-IQ player, but rather someone with strong tools to essentially bash his way to success. This strategy wasn't exactly placing Jokinen in a position of strength. Here's a link to some of the Jets' power play folly at different points of the season. Jeremy Weiss broke down the Jets' power play work and where it was failing.

With at least five very offensively gifted defensemen - Dustin Byfuglien, Tobias Enstrom, Zach Bogosian, Grant Clitsome and Paul Postma - on their NHL roster, and perhaps six or seven (Zach Redmond, Jacob Trouba), I hope that Olli Jokinen will be used in situations better suited to his strengths and weaknesses next season, probably best in the low right wing position as a shooting option or the man in front of the net setting screens.

Just like with 5v5 production, we'll show Jokinen's share of shot attempts and how his point production was influenced by shooting percentages 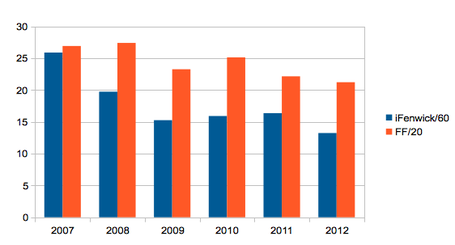 Sv% was removed as it is essentially useless for powerplay due to too small sample sizes, and personal Sh% was added in its place

Jokinen's production as a NHL player has always been pushed by him being a very strong power play producer. Unfortunately for the Jets in this shortened season, power play production is influenced more heavily by randomness than 5v5 production. Couple this with Jokinen playing on the worst team with a man-advantage he's been on, and you get points disaster.

So let's normalize Jokinen's production again with the same process:

This ends up with Jokinen improving his 2012-13 points from 14 pts in 45 games, to somewhere in the range of 24-29 pts in 45 games. Placing him below Little and above Antropov for points.

Plus/minus is great for knowing what happened when a player was on the ice, but terrible to evaluate players. This traditional stat is probably the least influenced by the individual than most, if not all, of the common and advanced hockey statistics. It's also heavily influenced by small periods of outliers. For example, Dustin Byfuglien has been a positive +/- with Jets 2.0 for his three most common defensive partners (Enstrom, Johnny Oduya, and Grant Clitsome) that accounts for 75% of his total TOI, yet he is a negative player overall (thanks Mark Stuart and Ondrej Pavelec).

Olli Jokinen ended up with a team worst -19, which is his lowest total since leaving Florida. Now PDO is a great measurement in helping determine how relevant a player's plus/minus is for evaluating the player. PDO is simply adding the On-Ice Sh% and On-Ice Sv% together, where the league average would be at 1000. While goaltending and shooting talent can legitimately inflate (or lack there of deflate) the numbers, the amount of volatility season-to-season shows how randomness tends to play a much larger roll.

Jokinen's PDO was the 8th worst in the NHL for forwards with 20+ games played. I used the same method for normalizing Jokinen's +/- as I did for his production. Although in this instance I used only shots on goal differentials, and not including shot attempts (Corsi) and non-blocked shot attempts (Fenwick).

This number is not pretty, but much improved. It'll be interesting to see if this number improves or not next season. Two of Jokinen's most common linemates, James Wright and Anntti Miettinen, pulled down on Olli like anchors. Looking at the Jets' percentage of shot attempts: 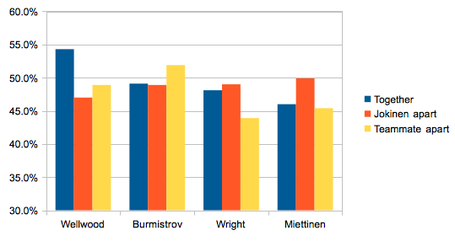 Due to sampling affects, the trends are more important than the values themselves. The point here shows that Jokinen was pulled up by Alexander Burmistrov and Kyle Wellwood while he was dragged down by James Wright and Antti Miettinen. Unless Mark Scheifele smashes down the door, it is most likely that Olli Jokinen plays most of the season with Evander Kane on the left wing, with the right wing being cycled between Blake Wheeler, Devin Setoguchi and Michael Frolik, with Setoguchi currently the primary candidate. While Setoguchi does not drive the play quite as well as Wellwood or Burmistrov, he will likely not be as heavy an anchor as Wright or Miettinen.

Hockey is a game of skill, but it is also a game of bounces. There are only so many goals to go around and they occur quite infrequently compared to most events in hockey. In the end, Olli Jokinen's offensive contribution to the Jets was lessened from a combination of luck, usage and aging (probably in that order). While his age mandates that he is extremely unlikely to develop back into the 80-90 point player he once was, it wouldn't be a stretch for Jets fans to hope and expect for 40-45 points. However, the caveat is that if Mark Scheifele pushes Jokinen down the Jets' depth chart, Jokinen will not be given the ice time or offensive opportunities needed to realize that level of production.

In the end, advanced statistics do not excuse Olli Jokinen for lackluster play. Jokinen made a lot of players worse with him than without. He was was outplayed by Kyle Wellwood, Alexander Burmistrov and Nik Antropov, yet was given more offensive opportunities and time on the 2nd line and power play. When Jokinen was on the ice, the other team had more scoring chances and possessed the puck more frequently than the Jets. But, Jokinen will likely bounce back into a decent middle 6 player for the Jets. This is the probable outcome, based on Jokinen's historical performance; however, probabilities are not destinies.