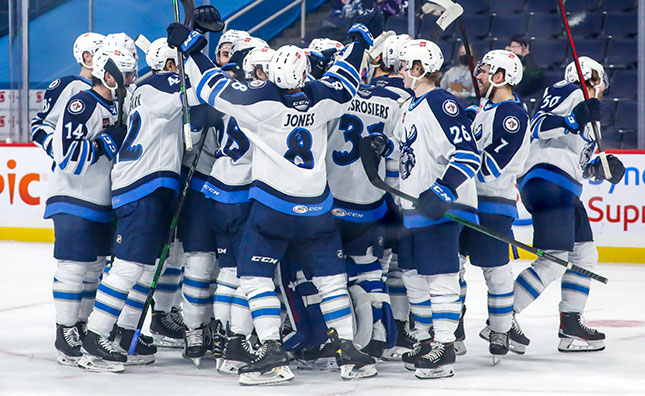 I continue to learn new things about the AHL and discovered that the higher ranked team gets to choose how the series' games are played out. In Manitoba's case, they opted to start the best of 5 series with 2 games in Milwaukee (May 6 & 7th), followed by 3 straight in Winnipeg (May 11, 13, & 15th). Not sure what the other option(s) was, but the only other 5 game series currently scheduled is following a more traditional two home games, two away games, & one home game. I guess with the Moose's choice, the team guarantees that they will be trying to close out a series win on home ice, but with a sweep you'd end up with the revenues from only 1 home game.

Here's how Manitoba has done against their division rivals:

The Moose did well versus the Central Division this season, winning 3 series out-right, splitting 2 other series, and only losing to Rockford. When playing in Winnipeg, the Jets' AHL team won 4 of 6 series and drew the other two. The road was a bit rougher on Manitoba, with 2 series wins, 2 split series, and 2 losses. Their success this season should at least give the Moose a chance to beat two of these teams to get to the AHL Conference Finals.

* - indicates signed to a contract with the Winnipeg Jets.

* - indicates signed to a contract with the Winnipeg Jets.

While nothing is guaranteed in terms of line combinations, since the Moose haven't had the full compliment of all these players to choose from before. However, there is a good chance that the above 2 lines stay together. The Top Line have been Manitoba's best trio since Cole Perfetti was called up to the Jets and all three are among the team's best scorers. I call them All Moose because they are all on AHL contracts with Manitoba and the line has become the heartbeat of the Moose in the latter part of the season. A great mix of tenacity on the forecheck and the ability to capitalize on their chances, this group is often the coach's choice to send out when the team needs to "win" a shift to change momentum.

Coach Morrison has many options to fill out the forward lineup, but these 6 probably have the inside track at those spots. Barron will probably be slotted in at one of the center openings, but how the rest plays out is up in the air. All but Poganski & Vesalainen can play center, so there are a myriad of combinations to work with. However, with question marks surrounding the health of right wingers Poganski & Reichel, Manitoba may have to look for help from those listed below. Fortunately both Vesalainen & Johnson can play right wing, so the reinforcements can be left wingers or even a center.

If the Moose were looking for potential right wingers, they have a few options in Meireles, Lynch, & Egle, who have all played a significant number of games this year. Young Torgersson is also fond of playing on his off-wing and probably provides the best top 6 option, but that is going on a limited sample size. When it comes to centers, the staff also have solid depth to fall back on, at least in terms of defensive play as I'm not sure how much offense they will get.

There are fewer questions when it comes to the defensive lineup, as the above 6 players will likely get the majority of icetime. The only real decision to make is whether to play Heinola or Samberg with Kovacevic on the top pairing. Earlier in the year, it was Ville playing with the Moose captain, but Heinola has been playing so great lately with Kovacevic that they might opt to keep them together for the playoff run.

Manitoba has decent depth to rely on in case injuries start piling up, with Lundmark & Phillips likely to be the first options to come out of the press box.

It's clear that the Manitoba Moose will be relying on Berdin to take them all the way to the Calder Cup Finals. When playing at the top of his game, the Russian can be a difference-maker, but the question will be whether he can keep playing at that level throughout the playoffs. Cormier is the most consistent option for the backup position and will have to shoulder the load if Berdin goes down.

If injuries do pop up, I'm really not sure which of these guys will get the tap from the coaching staff. Holm has been up & down in his performance, but Desrosiers hasn't played a game in a long time.

Well, hopefully that gives you all some idea on whether you want to purchase a AHLTV subscription to watch the Moose or not in the Calder Cup Playoffs. I'm hopeful that they can make a run, but this franchise tends to disappoint you, so trying not to let my hopes get too high.