Forward Line Combinations - What Has Worked & What Hasn't?

As I was waiting for tonight's Ottawa Senators - Winnipeg Jets game, I decided to browse the MoneyPuck website to see if I could determine which line combos have been effective for Winnipeg this year and which haven't. The site provides previews, breakdowns on live games, odds on making playoffs, stats for individual players or line combinations. Personally, I don't know anything about how the advanced stats are calculated, so just kind of take them at face value.

Going in, like most of us, I have plenty of expectations regarding what I'll find. For example, pretty sure that the stats won't be kind to the bottom-six players like Kristian Vesalainen, Jansen Harkins, & Dominic Toninato. And the data will likely support how Adam Lowry is detrimental to a line's scoring ability. Fairly certain that what I find will support the need to separate Mark Scheifele and Blake Wheeler. Well, let's see what I found out....

First of all, I opted to look at all line combinations that have played at least 40 minutes of ice time together. Then I decided to focus on how the various line combos did with respect to expected goals (xGoals) and actual goal differential (GDiff).

So, the cut-off gave us statistics on 22 different lines and I discovered that when it came to expected goals, the Jets had 12 lines above 50% and 10 below.

When it comes to specific players, I noted that Lowry was in 4 combos that had positive xGoals and 4 with negative. The Scheifele-Wheeler duo has only one combination with positive xGoals and that was when Lowry joined them (55.2%). So far this season, the coaching staff hasn't found a line combo that includes Vesalainen that produced positive xGoals (min 40 mins). Harkins had one (55.2%), when he played 40.2 minutes with Svechnikov/Toninato. I also saw that the Connor/Dubois duo never played on a line with a - xGoals, in fact Dubois was never on a line that wasn't expected to score more than their opponents. It seems the only way to keep a line with Ehlers on it to be a - xGoals, then you just put Scheifele/Copp on it (the only of 6 lines Ehlers was on that failed to create more expected goals than they allowed).

Winnipeg's top 2 lines in xGoals are Copp/Lowry/Reichel and Copp/Lowry/Ehlers (65.9% & 63.8%), with the Stastny/Scheifele/Ehlers line the only other one that was over 60%.

Ok, so expected goals are one thing, what does that data show about actual goals? When I looked at actual goals, I found that Winnipeg had 11 lines with a positive goal differential, 2 lines that broke even, and 8 lines in the negative.

Three different lines have managed to play a minimum of 40 minutes and not allow a goal against: Stastny/Scheifele/Ehlers (4 goals for/0 against), Harkins/Lowry/Vesalainen (4/0), and Harkins/Toninato/Svechnikov (1/0).

Those first 2 combinations join the Connor/Dubois/Perfetti line (75% GDiff), who has scored 6 goals and allowed 2 in 147.5 minutes, with Winnipeg's best goal differential (+4).

Lowry's other positive line combination was Stastny/Lowry/Poganski (66.7%). A fan favourite line is the Connor/Dubois/Ehlers trio and they a 63.6% GDiff so far. 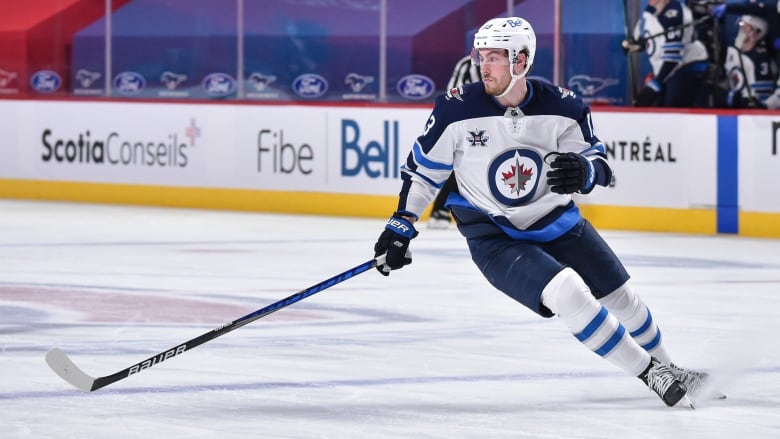 Here's what it looks like when you look at xGoals and GDiff side by side for Winnipeg's best lines this year (sorted by Center):

The first thing I noticed from all that is that PLD is pretty damn good!! Whether paired with Connor or not, the guy's line just keeps producing. Another thing that was interesting was that when Dubois was paired with Connor and someone else, the most productive linemate was Cole Perfetti, with Ehlers in 2nd and slightly ahead of Svechnikov.

Concerning our defensively inept star center, it probably be worth seeing him paired with Stastny & Ehlers, as that trio did very well in limited minutes. I also note that when Scheifele is paired with Wheeler and one of Stastny/Connor, the line loses the expected goal battle, but wins the real one.

Now how about Adam Lowry? Is it possible for a line with him on it to produce? Well, the top 2 options in the Lowry section provides a couple possible options with the players still available in the organization, although both Poganski and Vesalainen are in the AHL.

I was also pretty surprised to see that the Harkins/Toninato/Svechnikov trio had good xGoals and GDiff in limited minutes.

What stood out to you? Does it give you inspiration about a possible lineup for the remainder of this year? Or if you have already written this season off, does it give you a clearer idea of who to keep and who to ship out? Would enjoy reading your view/thoughts.