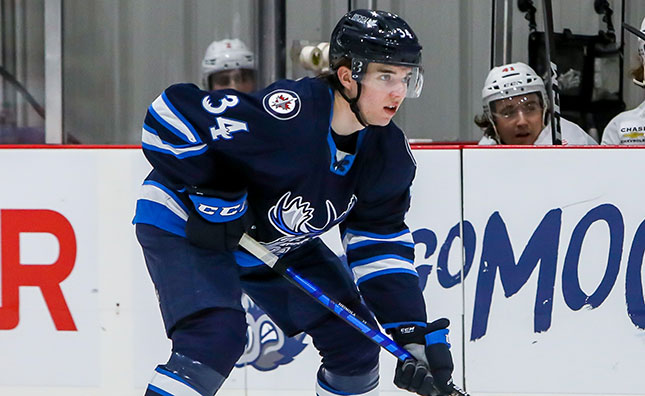 When it came down to selecting the player I thought has been the best for the Manitoba Moose in the first quarter of the regular season, the decision really came down to two players.

One was a free agent signing by the Winnipeg Jets this off-season, Alex Limoges. The 25 year old winger was born in a state not exactly known for churning out hockey players, Virginia. After completing his NCAA career with Penn State, the undrafted Limoges has shown that he can score the past 2 seasons in the AHL with the San Diego Gulls (Anaheim Ducks) with 61 pts in 85 games (.718%).

This season with the Moose has seen Alex become a mainstay on the top forward line, as well as the first PP unit. He hasn't disappointed the coaching staff, netting 6 goals and 10 assists for a team-leading 16 pts in 15 games (1.067%) wearing the antlered Manitoba jersey. The American forward has really helped the powerplay get going after a slow start, pocketing 2 goals with the man-advantage. He has also shown up in clutch times, with two game winners under his belt.

Limoges' current linemates of Kevin Stenlund & Jeff Malott are the biggest offensive threat Head Coach Mark Morrison can throw out on the ice, whether it's at even strength or on the powerplay.

Even with all that, Alex couldn't hold off the eventual winner.....Ville Heinola.

When it comes to the Jets' best defenseman prospect playing in the AHL, the 21 yr old Finnish defender likely holds that spot just by his 1st round draft pick pedigree alone. Not sitting on his laurels, nor letting his disappointment in not wearing a Jets uniform this season impact his effort, Heinola actually stepped up and is playing the best hockey I've seen from him.

After being selected 20th overall in the 2019 draft, Ville actually got into 3 AHL games that season and picked up his first point (assist). He followed that up with 11 pts in 19 games (.579 pts/gm) in his second year and 26 pts in 41 games (.634 pts/gm) last season. The young Finn also improved defensively each season, going from -2 to +4 to +7. Heinola had only managed 9 goals in 63 AHL games coming into the year, with 7 of those coming on the powerplay.

For the first time, the offensively talented d-man was handed the reins to the #1 LD spot right out of the gate. That position was made tougher by the loss of Johnny Kovacevic to a waiver claim and Jimmy Oligny still recovering from an injury. This has resulted in Heinola being paired with second year Moose, Simon Lundmark.

Heinola acts as the general of the 1st PP unit, directing the flow of play to create chances that result in goals often without getting on the scoresheet. Typically, he controls the attack from his spot in the middle of the blueline, trying to set up one-timers to either side with his great passing. Ville has only picked up 2 assists on the powerplay this season, partly due to hitting at least 7 goal posts/crossbars on the year.

While he can't really be considered a fast skater, Heinola is silky smooth and gets the job done efficiently using his agility. His ability to make tight cuts while maintaining control of the puck helps the young d-man skate the puck out of the defensive zone, but he is even more dangerous when he uses his amazing vision to make those zone exit passes that result in scoring chances for Manitoba. Heinola uses those same skating/passing strengths in the defensive zone to evade aggressive forechecks with his feet or make a quick outlet to a teammate.

This season, the 21 year old defenseman has amassed 10 pts in the 13 games he has played, for a .769 point per game rate. Of those 10 pts, eight were accumulated at even strength (one at 3 on 3 in OT). Most impressively, Heinola is +15 on a team with a +5 goal differential, showing that he can play top pairing minutes versus the best of what the AHL can throw at him and still come out on top.

Helping to shine the spotlight on the impact Heinola has had on the Moose this season, Manitoba went 2-2-1 in the 5 games he was called up to the NHL club, including their only 2 game losing streak of the campaign.

I could go on more about the 20th overall pick in the 2019 NHL Entry Draft, but before I add a bit more, let's check out the AHL stats for Heinola and some comparable smaller defensemen (Sami Niku, Nils Lundqvist, and Matt Grzelcyk).

I was too lazy to search forever looking for players that fit better (hit some sort of limit on pages looked at on Elite Prospects that I have to pay if I want to view any more, thankfully there are many other sites to look at to finish the article), but I found examples of successful and non-successful players that fit the Heinola mold.

While the 6' Niku may be a slightly taller than Ville, a much lower drafted player (6th round), he does however meet the offensive d-man mark. It's also true that Grzelcyk was drafted in the 3rd round and is slightly smaller, and not as offensively adept when matched against Heinola. Lundqvist may be the most apt comparison, if you disregard the fact that he is a righty.

When you take a look at the first two, you see a smaller offensive d-man (Niku) that could never get his defensive play strong enough for an NHL coach to give him a long-term look and the other is Grzelcyk, who hasn't let his 5'10" frame and a lack of scoring abilities from permanently making the Boston Bruins.

Lundqvist delayed his North American debut until he was 21 years old, but plays a very similar style to Heinola and their early hockey careers included significant offensive output. The RHD ended up getting called up to the New York Rangers after putting up 15 pts in 34 games with the Hartford WolfPack. Lundqvist has managed to provide some offense at the NHL level and is +2 in 47 games split between the Rangers and Dallas Stars.

Obviously Heinola has a higher upside than the Niku/Grzelcyk comparisons, but I do think Ville has it in him to become the best of each of these players - i.e. play sound defensively, while contributing offensively at the NHL level - and his play in the AHL this season just increases those expectations. Here's hoping that he gets the chance to do it in a Jets uniform (unless the return is amazing). When it comes to Lundqvist, Heinola has put up better offensive and plus/minus numbers in the AHL, so you would hope that he could also out-do what Nils has/will do in his NHL career.

As a well-known detractor of Ville's defensive skills in the past, I am starting to think of buying a permanent seat on the Give Heinola A Chance bus. If he can keep up his inspired play, I really can't see how the Winnipeg Jets management can avoid the elephant in the room much longer. Possibly they can assure him the lock-jam will be dealt with in the upcoming off-season so that he gets a legit chance of becoming a Jet next year....but I don't really think they should push it much further along with than that.