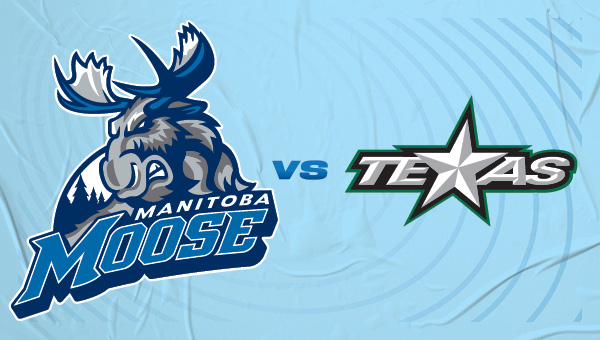 The Manitoba Moose will be taking on the Texas Stars tonight in a battle of Central Division rivals. The two teams are on opposite ends of the division standings, with the Moose sitting in 2nd place, while the Stars are in the 6th.

The Manitoba coaching staff continues to have to deal with a carousel of players coming in and going out of the lineup. For tonight's contest, the Moose will be without the services of Declan Chisholm, Leon Gawanke, & Evan Polei (Covid protocols). However, they will be adding a couple of forwards in Luke Johnson & Ty Pelton-Byce, allowing them to dress 11 forwards and 6 defensemen. Mikhail Berdin remains unavailable, so Evan Cormier will get his 3rd straight start while the Moose added yet another goalie on a PTO (Hayden Lavigne) to back him up. See the complete projected lines below.

The Texas Stars have managed a winning percentage of .435 so far this season, barely keeping them out of last place. They have played just 23 games, the fewest of any of the Central Division teams. While they are coming off a win, the Stars are just 3-5-2 in their past 10 games.

Texas will have a quality goaltender in net tonight, as former Dallas Star Anton Khudobin will get the start. The Stars roster includes long-time AHLers Alex Petrovic and Curtis McKenzie, 1st rounder Ty Dellandrea (13th in 2018), and 3rd rounder Oskar Back (75th in 2018).