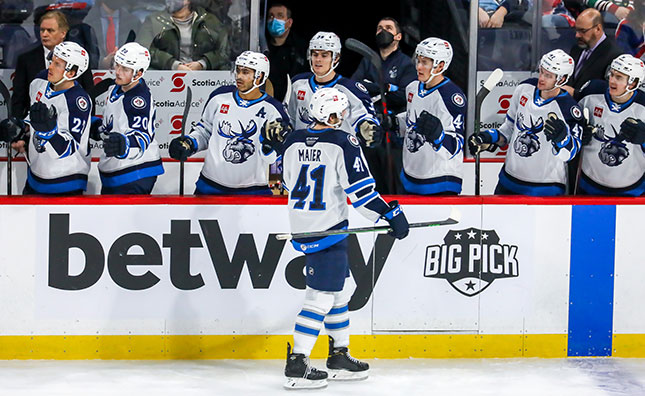 The Manitoba Moose will be playing tonight against the Iowa Wild, in what will be their last home game until January 22nd. The Moose currently sit comfortably in 2nd place in the AHL Central Division, while the Wild have dropped into a tie for 4th since losing their last game to Manitoba. The Jets' AHL affiliate will look to continue their strong play at home (10-2), where they currently have outscored opponents 40 to 28.

Some interesting stats I came across are that Moose defensemen have accounted for an impressive 25% of the team's goals this season, that LD Ville Heinola and LW Mikey Eyssimont lead the team in shots on net (68), and Manitoba has averaged the sixth-fewest penalty minutes per game (11.35) in the AHL.

The Moose have added another Winnipeg-born goalie (Jeremy Link) to be the backup to Evan Cormier for tonight's game. Coach Morrison is going with an ultra-rare 10 forward/8 defensemen ratio with RD Simon Lundmark drawing into the lineup and LW Thomas Caron (Covid Protocol) heading out. Check out the projected lines below.

The Iowa Wild have lost 2 of their better players (Marco Rossi & Matt Boldy) due to a call up from Minnesota, so they will be a bit short-handed tonight. Interestingly, Rossi, who was drafted one spot ahead of Perfetti, is practicing as the center on the 2nd line with the NHL's Wild. Will be interesting to see if they actually play him there for an NHL game, but they don't play until Thursday so things may change before then.

For tonight's match, Iowa has tapped Trevin Kozlowski to start again in net and are hoping he can lead them to their first win of 2022.