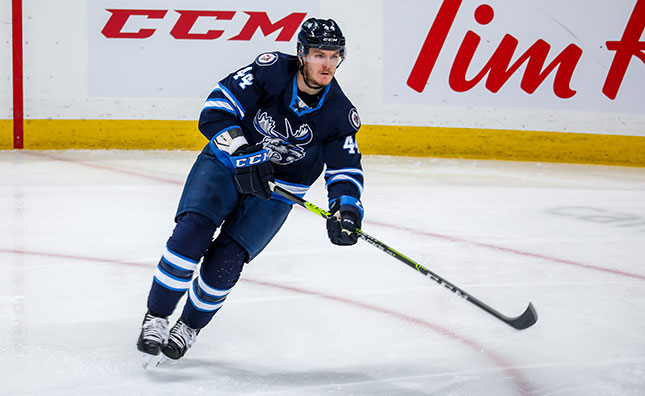 The Manitoba Moose are set to play their first game since December 17th this afternoon when they take on the Iowa Wild. They have had a pair of games versus the Texas Stars and the Abbotsford Canucks postponed due to the pandemic and will have to make up those matches later in the season.

Manitoba currently finds itself sitting in 2nd place in the AHL's Central Division with a winning percentage of .620, while Iowa is tied for 3rd place with Grand Rapids (.520). Coming into today's game, the Moose have been 6-4 over their past 10 games, while the Wild have gone 2-5-1-2.

The Moose own the third-highest winning percentage in the AHL when scoring first (.857) this year. Manitoba defenseman Ville Heinola has so far recorded the most shots (65) by a defenseman in the AHL.

With some of the regular Moose players (Suess, Reichel, Gustafsson, Holm, & Perfetti) currently up with the Jets, the coaching staff had to make quite a few alterations to the lineup. With Holm on Winnipeg's taxi squad and Mikhail Berdin unavailable (illness?), Manitoba has recalled Philippe Desrosiers from the ECHL, signed Evan Cormier, and have Winnipegger Jason Kasdorf as an emergency backup for today's game. When you also factor in the injury to forward Luke Johnson, Coach Morrison has opted to go with a 11 forward/7 defenseman ratio, though Nogier may be playing forward...check out the full lineup below.

The Iowa Wild have managed to beat the Manitoba Moose on 2 of 3 occasions this season, with Austrian Marco Rossi (drafted 1 spot ahead of Cole Perfetti) and former NHL goaltender Andrew Hammond leading the way. Iowa has yet to start the same goalie in any of the 3 games they have played versus Manitoba and will continue the pattern as they will start Trevin Kozlowski (first start of the season, though he did play 19 minutes in relief, allowing 2 goals against).