In part 6 of our series, let's see what we can expect from defenseman Dmitri Kuzmin.... 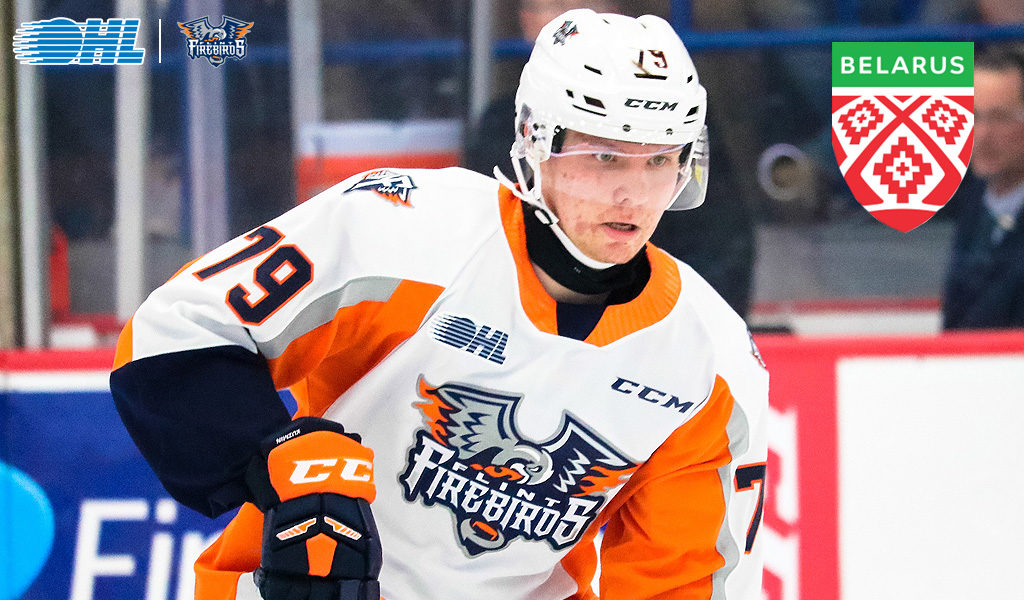 There is no denying how fun Kuzmin is to watch. If you’ve heard of the Belarussian defender before, it is likely because he scored a "lacrosse/Michigan" styled goal against Switzerland at the World U-18 tournament.

His skating ability and stick-handling are his greatest assets and make him an offensive threat. Kuzmin has pretty good vision in the offensive zone and is able to generate plenty of dangerous shot attempts for himself and his teammates. He also found himself playing on the right side, as a left-handed shot, in the offensive zone. This disallowed him to use the boards to shield the puck, however, his creativity, stick-handling, and ability to walk the blue line made this a non-issue in his offensive play.

And defensively, Kuzmin does show promise. His vision often allows him to break up passes in the neutral zone and prevent offensive transitions for opponents. Although at select times he misreads plays, he often finds himself positioned well in the defensive zone.

However, there are some flaws with his defensive game. Kuzmin will be passive when opponents cross the red line with speed and allow easy offensive zone transitions in those situations. He struggles with gap control on transitions against as well.

He was chosen 46th overall by the Flint Firebirds in the Canadian Hockey League Import Draft in 2020 and is expected to suit up in the Ontario Hockey League this season. Kuzmin was set to play in the OHL in his draft year after signing an agreement with Flint. Unfortunately the OHL never played last season and the blueliner was forced to stay with the Belarussian farm team of Dinamo Minsk.

Winnipeg used their third round pick (82nd overall) in the 2021 NHL Draft to select the left-handed defenseman.

Kuzmin just helped Belarus capture the Division 1A portion of the World Junior Championship, chipping in five points in five games while helping his country move back into the top division for the tournament in 2023.

"You know, it's funny. I think he's closer to five (foot) ten," said Jets director of amateur scouting Mark Hillier. "Some players, you look at and you see a small player. With him, I don't see a small player. The way he plays, I just see a good player. He's got a dynamic side to his game. He can skate, he can move the puck. He can run a power play. I'm sure you've seen the lacrosse-type goal that he scored that's on all the video clips, but he's just a character kid, too. Plays really hard and competes. Has a great stick. He's one of those guys, it's a challenge obviously to play pro or NHL at that size, but he has all the intangibles. The heart. The work ethic. The grit and determination. We just think it's a good pick, regardless of size."

"He works give-and-goes from the point, reads hands-offs, fills space, and stays low when activated -- an offensive zone possession extender. There’s no locking to the point -- he skates down the middle or down low when the puck comes to the point, then he dips behind his man and cuts inside". - EliteProspects 2021 NHL Draft Guide

"His real value comes after he makes that initial play in transition to stop his opponents in their tracks as he turns play up ice. He is a skilled passer and an elusive skater. He protects the puck well for an undersized defender and he uses his frame to the most of his ability which is an encouraging sign. His puck skill is phenomenal and he will be a powerplay option at any level he plays at." – Tony Ferrari, Dobber Prospects

"When it comes to goal scoring and non power play production, Kuzmin enjoys pinching up and being part of the offensive scheme down low. In fact, none of Kuzmin’s four goals (league play and international play) from this year came from the point. With that being said, Kuzmin will pinch up to create dangerous pass attempts and he will play the puck behind the net quite frequently." – Josh Tessler, Smaht Scouting

Kuzmin is a capable offensive-minded, puck-moving defenseman. This season in the top pro league in Belarus he played in all situations for his team, logging heavy minutes while playing on the right side as a left-shot defenseman. His greatest assets are his blend of smooth mobility and puck skill. His edgework is top-notch, allowing him to move in all directions with ease, control gaps, and keep himself between puck carriers and his own net. He can turn away from forecheckers to find passing lanes on the breakout. Displays a high level of skill to his game, able to use flashy dekes to beat checkers in both the offensive zone and while carrying the puck in transition. Though his puck skills are more often than not a positive, there are instances where he is too overzealous while handling the puck in his own zone, attempting moves on forecheckers in high-risk scenarios that can burn him. Despite being trusted by his coaching staff to kill penalties there is still a lot of work to be done in his defensive game. Skating at around 5-foot-10, he is fairly undersized for a defender and has difficulty separating players from the puck below the hash marks, and he more often than not comes up short in battles for position in front of his own goal. His defending in his own zone, and particularly in front of his own net, is heavily reliant on stick work and positioning. However, he is often caught with just one hand on his stick in his own zone, which in turn causes him to lose stick battles for loose pucks and makes it difficult for him to tie up opposing sticks in front of his own net and box out attackers. Overall, Kuzmin shows a lot to be excited about in his offensive game and ability as a puck-mover, but will need some fine-tuning in his own zone moving forward. – FCHockey’s 2021 NHL Draft Guide

Kuzmin joined Dinamo-Molodechno in Belarus' 2nd best division the next year, where he put up 12 pts (3 goals) in 46 regular season games and 4 pts (3 goals) in 6 play-off games. The young defenseman played 5 games for Belarus at the World Junior U-18 Championships, scoring once and adding 4 assists.

This season, Kuzmin made the jump to North America after he was drafted by the Flint Firebirds of the OHL. To date, he has scored once (9 assists) in 15 games with Flint, but also chipped in 5 pts in 5 games for Belarus during the World Junior U-20 Qualifying Rounds.

Coming into the 2021 NHL Draft, Kuzmin was considered a decent risk for an NHL team to take in the early rounds. Due to the level of competition he faced in his native Belarus, it was always going to take a leap of faith in projecting Kuzmin's development.

That being said, he has plenty of attributes that are strong already, so with some further time in the OHL/AHL to work on the weaker parts of his game, he could definitely end up making Winnipeg look smart for drafting him in the 3rd round.

He's off to a decent start to his OHL career and with a strong finish, he may be an option for the Manitoba Moose next year (he has already signed for 3 years with the Jets).

If the Belarussian blueliner is able to make an NHL impact, I think he becomes a potential second or third pairing defenseman with power-play quarterbacking ability, though I would expect it will take him at least 3 years to reach that level.