As we near the end of our 7 part series, we get to take a look at the Russian winger Nikita Chibrikov, one of the 4 Jet prospects playing in this year's World Juniors.... 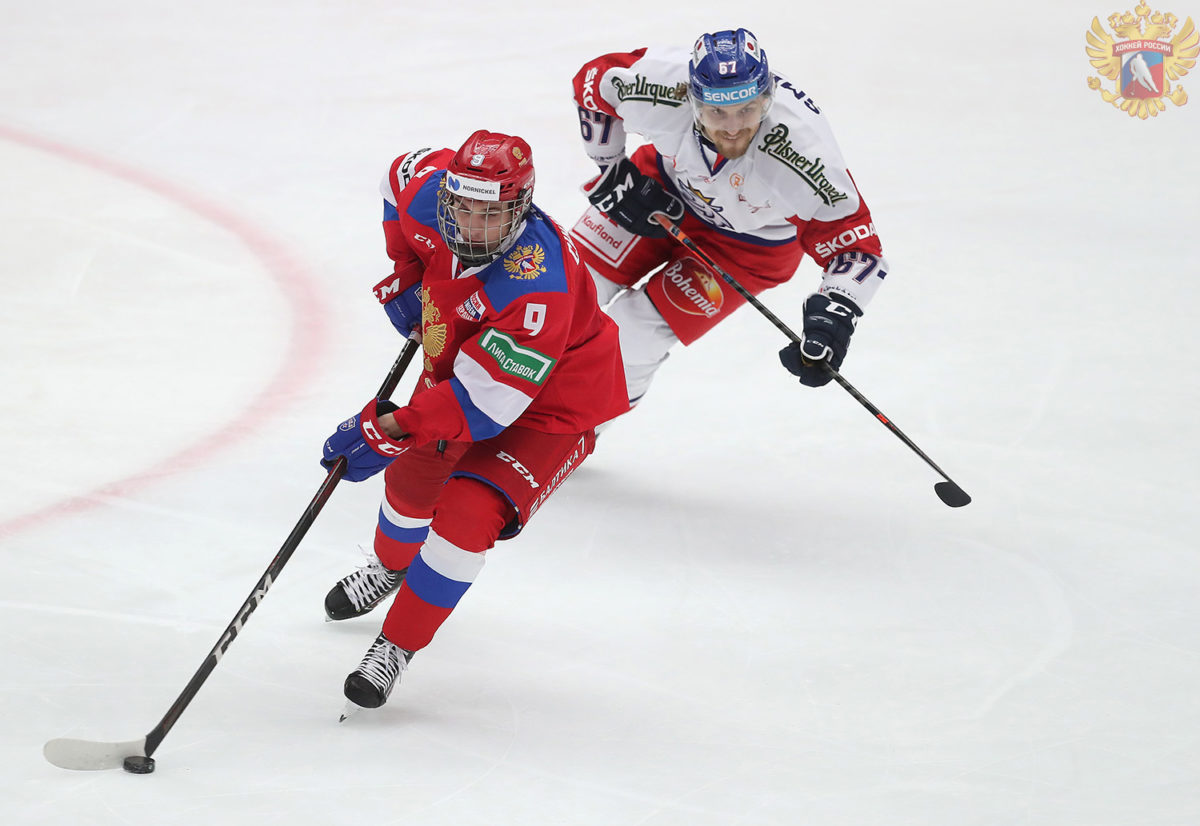 In a draft class featuring several question marks following another interrupted year of hockey, Nikita Chibrikov was able to not just land himself on the list of top prospects, but also rise in the ranks. Sportsnet's draft expert, Sam Cosentino, first included Chibrikov at No. 30 on his monthly rankings in April ahead of the U-18 World Championship.

"Has climbed the ladder steadily and is an excitable player who shows confidently with the puck, but needs to work on his play without it," Cosentino wrote of Chibrikov at the time.

The winger, who wore the C for his country at the U-18 World Championship, registered four goals and 13 points in seven games en route to a silver medal, sitting second in points among his Russian teammates and fourth tournament-wide. His nine assists were tops among all players at the event. Chibrikov was named as a top-three player on Russia for his efforts and moved up 10 spots to No. 20 after an incredible showing as Team Russia's captain.

Viewed by many draft prognosticators as first-round talent, Chibrikov was chosen by the Winnipeg Jets in the second round (50th overall) of the 2021 NHL Draft.

The flashy forward from Moscow, possesses elite playmaking abilities. When you combine Chibrikov’s vision, passing skills, and lethal shot, you have the total package. His ability to skate fluently and his aggressive style of play have allowed him to excel at every level he has played at. Chibrikov’s forechecking ability is where he really shines in the offensive zone.

He's also unafraid to mix it up with a physical playing style, which helped him immensely as he took his first strides in the KHL.

The 2021 second-rounder Nikita Chibrikov is an alternate captain for Team Russia at the World Junior Championship after wearing the C for his country at the Under-18 tournament last season.

If you give him space, a runway through the neutral zone, or a pocket in the offensive end, he will cut around the opposition with a combination of rapid handling and crossovers moves. He locates teammates early in possession sequences and finds ways to reach them by going to his backhand, by saucing the puck above sticks, banking it on the boards, or the goalie’s pads. -EliteProspects 2021 NHL Draft Guide

"I think he is more or less a classical Russian forward, is skilled, is fast, and has good hockey sense," NHL director of European Scouting Goran Stubb "He's full of surprises and an excellent prospect. He's by far the best Russia-born prospect this season; a very good player."

Chibrikov spent the season playing for three St. Petersburg teams (KHL, MHL and VHL). He didn’t necessarily dominate – not even in the junior level – but he scored 13 points in 7 games at U18s and had strong showings in men’s national exhibition games. Chibrikov is a really skilled playmaker with great skating ability. He’s a smart, deceptive passer and possesses a great vision. It seemed as though sometimes he didn’t stand out at the junior level since he benefits greatly from a more structured game and utilizing his teammates. That’s why his skills might not be as evident at lower levels his teammates struggle to convert on his playmaking. He is very raw physically and had some consistency issues throughout the season, but I think playing in the KHL will help him grow and develop a more complete game. Chibrikov might be a bit of a risky pick in terms of reaching his potential but if everything goes right, he could become a good top six point producer in the NHL. - Eetu Siltanen, Dobber Prospects

"Chibrikov is a smooth-skating, offense-first winger with the ability to control games with the puck on his stick. Chibrikov can obliterate defenses with, not just his skating speed, but his lightning quick turns and pure agility. Despite his smaller frame, he engages physically with opposing skaters and holds his own. Chibrikov is an aggressive forechecker, but leaves some to be desired in the defensive zone, most notably with his positioning." – Dylan Griffing, DobberProspects

Where many gifted young prospects play loose, flowing games that rely on hanging onto the puck and often playing away from pressure until the right play opens up, Chibrikov plays a direct, more intentional game. Against his peers, that game allows him to attack at and through pressure, create his own chances, and drive play to the inside when he has the puck. When there isn’t the same space to attack into or the same openings in coverage against men, his game can really quiet. When he’s engaged in the fight and keeping his feet moving, there’s a lot to like about his ability to impact a shift (both by ramping up the pace with his skating or slowing the game down to play a little more calculating) in a variety of ways. But I’ve also come away from some viewings feeling like he wasn’t nearly as active or present as he needed to be. He’s a bit of an enigma. A strong performance at U18 worlds definitely helped him solidify his stock as a first-rounder, though. - Scott Wheeler, The Athletic

Chibrikov impressed early at the junior level this season, earning a quick promotion to playing versus men where he held his own at the VHL and KHL levels and making an appearance with Russia’s senior team. He was also a top scorer at the U18 worlds with 13 points in seven games. He’s undersized and not an amazing skater for his size, but he’s done well versus pros because of his tremendous playmaking ability and his ability to win battles despite his size. He can make slick one-on-one plays, creative plays under pressure and find seams consistently. He’s physical and responsible defensively. He could be a more explosive skater ideally, but the other elements of his game pop. In a sentence, Chibrikov projects as a top-six forward who will be on an NHL power play. - Corey Pronman, The Athletic

"One of the better Russian players eligible for this year’s draft class, Nikita Chibrikov has a lot of promise to his game. What impresses me the most about him is his poise with the puck on his stick and his skating ability. He is able to effectively get to top speed using crossovers and is not afraid to attack open lanes driving through the neutral zone. He has good hands in tight and can find teammates in the slot even with a defender draped over him. His shot is also something to behold. He is able to get it off in a hurry and is good at using deceptive moves to place it where he wants it. He does not shy down from physical play, either. He battles hard for the puck in the corners and has good lower-body strength, making it hard to knock him off the puck. The one knock against Chibrikov is his defensive play. At times, he is great at coming to backcheck and help disrupt passing lanes with his active stick, but other times he is practically invisible in the defensive zone or he barely tries. He processes the game at a high level and has shown that he reads the play really well." - Mathieu Sheridan - The Hockey Writers

"I want my team to win and that’s the first rule," Nikita Chibrikov said, "I have a combination (with how) I play. A lot of passes, I have a good sense, a good hockey IQ. I can skate and use this very much. As for style, more of a playmaker but I can adjust myself to go one-on-one and score goals from unreal positions."

"Chibrikov’s got elite offensive hockey sense and skills. He’s a player that finds the right routes to the puck," said Jets director of amateur scouting Mark Hillier. "He’s always in the right spot offensively. Pays the price to score goals. He was really good at the under 18 tournament at the end of the year where we had a good contingent of scouts there to see live games. And we just feel really good about the skill level there. We think he has top-two-line, power-play-type potential there in the future."

The 2019-20 season saw Chibrikov make the jump to the MHL (Junior Hockey League) with the Dynamo and he was able to put up 16 pts in 32 games in his rookie season. He also got into 21 games with Russian international squads, totalling 23 pts.

The following season saw the Russian move on to SKA St. Petersburg, where he played in 4 different leagues/tournaments. Chibrikov started off in the MHL, pocketing 9 pts in 11 games before making the jump to the VHL (2nd highest men's league). He ended up getting 8 pts in 20 games at that level before he got his first taste of the KHL (top men's league) at the age of 17 (2 pts in 16 games).

While Brad Marchand’s production might be a little high when it comes to comparing him to Chibrikov, the transitional play and the grittiness of Chibrikov truly remind me of Marchand. Marchand loves to push forwards in the center of the zone to give his teammates options in high and medium danger.

If you liked Rodion Amirov, there is a strong chance that you will fall head over heels for Chibrikov. In EliteProspects Editor In Chief, J.D. Burke said "I spoke to one scout who likened Chibrikov’s game to that of Rodion Amirov. It’s a pretty apt comparison, too. Chibrikov is a highly-skilled playmaking winger with a drive for the centre-lane and sound defensive details."

Still 18 years of age, Nikita Chibrikov unsurprisingly has a lot of work to do if he wants to become an NHLer in the future. He will be looking to show that he can make an impact offensively, while continuing to refine his defensive game at the top level of Russian hockey (KHL).

While I am not very familiar with Rodion Amirov's game, a comparison of Chibrikov becoming a slightly less productive Brad Marchand definitely gets me excited to see him in a Jets' jersey. While this may be the top end of what Chibrikov can develop into, it will definitely take time for him to reach those heights. I wouldn't expect to see him in North American until 2023-24 or 2024-25 at the earliest.

There is always a small level of concern with drafting Russian players, as they sometimes prefer to stay in their homeland to play their professional hockey. Despite the uncertainty as to when he will move to the NHL, he does possess the skills required to excel as a top-six forward in the NHL. The Winnipeg Jets can always use more high-motor players with offensive upside, so we will have to wait in anticipation to see how Chibrikov's development progresses.

UP NEXT: Dmitri Kuzmin - LD