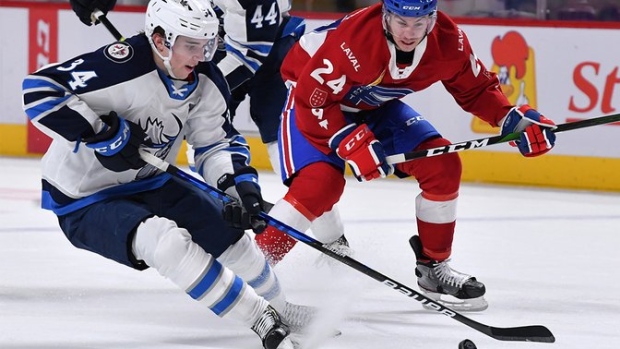 The Manitoba Moose (1-1) faced off against the Laval Rocket (1-1) tonight to finish off the 3 game road trip that started their season.

In the opening 2 games, the Moose have spread out their offense, with 12 of 18 players getting their first points of the year. On the negative side, guys like David Gustafsson & Jeff Malott are amongst the players yet to find the scoresheet.

Johnny Kovacevic was leading the team with 3 pts through the opening pair of games versus the Toronto Marlies, while Mikey Eyssimont & Greg Meireles each picked up 2 points. Mikhail Berdin's record was 1-1 with a 2.00 GAA & a .907 save percentage coming into tonight's game.

Manitoba will be altering their lineup for the first time of the season, as Dominic Toninato & Nicholas Jones come out and are replaced by CJ Suess & Thomas Caron (possibly in preparation of calling Toninato up to the Jets?).

Cole Perfetti was assigned to the Moose today, but with Manitoba currently on the road, I'm guessing he won't get his first AHL action until Friday's home opener. (though if COVID spreads through the Jets as some rumours are indicating, he may be called back up to the big club before then)