Thoughts on Mediocrity and Progress

Share All sharing options for: Thoughts on Mediocrity and Progress 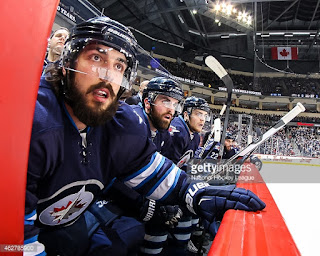 Anyone with access to a blog - or newspaper column for that matter - has written or will write something with a headline like, "Should the Jets tank?" or, "What the hell is Chevy going to do?" in the coming weeks. The article will probably be some combination of frustration, angst, and pessimism, and almost assuredly utilize an image like the one below:

Things are going poorly. Five points out of last place poorly. The Jets are better than their record, but not that much better than their record. Add to this the unresolved contract statuses of Andrew Ladd and Dustin Byfuglien, the growing pains or disappointing first halves of most of their younger players, and a GM that only emerges once a year to make personnel moves by drafting 18-year-olds (the exception being if a roster player demands a trade multiple times and has his track suit thrown into the shower by the team's prom king / father figure). Suffice to say that it is not a comfortable time to be a Jets fan.

And more unpleasant buzz-kill is available for those who desire to look for it. One HockeyDB image and one Microsoft Word table should do the trick:

Exhibit B:
It would not be hard to argue that the Jets have been caught in a trap of mediocrity. In their fifth season under current management, the Jets have made the playoffs once and have never drafted higher than the 7th overall pick inherited from Atlanta. This is a problem if you believe that while Nik Ehlers (9th overall) is very good, odds are that Aaron Ekblad (1st overall), Sam Reinhart (2nd overall), Leon Draisaitl (3rd overall), and Sam Bennett (4th overall) will be a little bit better. The same could be said of every draft year. This is not to critique the Jets' drafting, which according to outside sources have left the Jets well-stocked relative to their peers. However it remains to be seen whether even above-average drafting (if this is even true, and if so, how repeatable it is) in the middle third of the first round will be enough to lift the Jets past both the NHL's established upper class and the ones who have added generational talents like Connor McDavid, Jack Eichel, or Auston Matthews to the fold.

What should the Jets do, you ask? Since we can't go back in time and somehow force Chevy to avert the Stafford/Frolik downgrade, re-sign Stempniak, acquire a second actual NHL left-handed defenceman behind Tobias Enstrom, and (of course) injure Ondrej Pavelec earlier in the season, one answer is to embrace the tank. Trade Dustin Byfuglien and Andrew Ladd for a combination of draft picks and players with term beyond this season. Put your best goalie back in the AHL and see what can be done to inch closer to Auston Matthews or another worthy consolation prize.

Any combination of those moves, while rational, does not guarantee progress. Before this season it was generally accepted by fans that the Jets' struggles should be placed within the context of a general upward progression: Chipman & Co. bought a very bad team but would gradually transform it into a team that would consistently be a multi-round threat come playoff time. Following up their first playoff berth with a 6th or 7th place divisional finish while potentially losing two of their best players is a stinging setback - one that may linger next year as well, depending how Ladd and Byfuglien are replaced. If the Jets are still making progress under capable management, fans' patience is being tested at the very least.

But while the difficulties faced now are real we should also keep in mind that they will be fairly typical moving forward. Yes, the Jets are caught in a mediocrity trap. And so is every single other team in the NHL. While the degrees of ensnarement vary by team - and there are a few outliers such as the Chicago Blackhawks, 2014/15 Buffalo Sabres or the Edmonton Oilers, 2010 to 2015 TBD -  the differences are not all that stark.  Every team wants to be that consistent, multi-round playoff threat, but every team spends about the same amount on player salaries to do so. Every team says their plan is to "draft and develop", but how many scouting departments out-draft their peers with consistency? The standings reflect these small differences. Five points fewer and the Jets would be in last place. Seven additional points would put them in the playoffs.1 Things are close but... if you're hoping for either extreme, odds are you're not going to get it this year.

Success in the NHL is an inefficiency that the market is quick to correct for. Even the Jets, with their limited successes so far, now must come to grips with this on the contract front. The Jets drafted two good players in Mark Scheifele and Jacob Trouba but beginning next season both players complete their team-friendly entry level deals and will be paid closer to market rates. These raises will require one or both of Andrew Ladd or Dustin Byfuglien - better players - to be jettisoned. That we have reached this point with only one 4-game playoff appearance should certainly be a disappointment.

What is the direction of the Winnipeg Jets then? Onward and upward, or more seasons of missing the playoffs? That remains to be seen. Are Chevy & Co. shrewd managers outsmarting the rest of the league with regularity? Can't say that from this spot in the standings. Are they fools running the team into the ground? They've apparently drafted very well and their dumbest move was not re-signing one middle-six forward.2 Either extreme is a stretch. What the Jets are, is simply one of thirty teams trying to draft well, sign good contracts, avoid signing bad ones, and praying for a goaltending saviour. It's not the most dramatic story line but it'll still be fun, even if it isn't cheap.

I would expect the Jets to continue to be caught somewhere in the mediocrity trap. I also don't think that this is necessarily a bad thing - so long they can nudge their way above the playoff line sooner than later.


1 Wonder if playoff races are good for business?
2 That was the dumbest move. Worst move was Pavelec's 5-year contract.