It is interesting to see how much can change in a year. After two consecutive years at second in the Top 25 Under 25, Bogosian has been passed by two individuals, one of them being another right-handed shot defenseman.

What has changed? Is anything the same? Is there hope for a better future or improvement?

One thing that has changed is fan perspective. Part of it simply comes with raised expectations. In the summer of 2013, Zach Bogosian signed a 36 million dollar contract for 7 years. Bogosian also took on a much larger role. Zach moved up to the top pair for the Jets after Dustin Byfuglien was moved from defense to forward.

Human perspective is also shaped by low-occurrence, high-profile events. For hockey fans, this usually means goals the player had a direct influence over, and causes fan approval ratings to shift with shooting percentages and/or PDO.

If you have been following the Jets since the Thrashers days, you will probably say you could put a third line on this graph called "fan approval level" and it would likely follow a similar pattern: 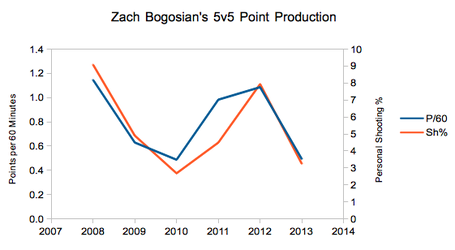 Not all is lost though. Not all is doom and gloom.

For the most part, shooting percentage has large input variables due to factors outside of Bogosian's control. In the long run, we should expect Bogosian's offence to bounce back to historical norms.

Bogosian posted an Open Play Fenwick (non-blocked shot differential) of 50.2% for 2013-14. His average the two previous seasons was also 50.2%. So, not all went down a black hole.

While the likelihood of Bogosian elevating his play to the levels of draft-classmates Drew Doughty, Erik Karlsson, or Alex Pietrangelo is nearing zero chance levels, Bogosian is still trending to towards becoming a plus-value top four defensemen.

If all goes well, a defensive core of Tobias Enstrom, Dustin Byfuglien, Zach Bogosian, Jacob Trouba, and Josh Morrissey could become the envy of many teams in the NHL.

Zach Bogosian is a decent NHL defenseman, but hope that he will develop into the franchise cornerstone he was drafted to be is dwindling. Bogosian remains a high energy player, but he also continues to be plagued by inconsistency. Plainly put, he is prone to making strange decisions with the puck and even stranger decisions when he doesn't have it. Still, Bogosian's physical skills are unquestionable. He is a beast, but his health also remains a question mark. Will better health lead to more consistent play? Is better health coming? I don't know.

Bogosian has really dropped off over the past few seasons, and whether it’s simply just the injuries he’s sustained or a lack of hockey IQ shining through is up for debate. But it’s hard to discount what Bogo did in his rookie season so there’s hope that he can get back to that. While his possession numbers are middling, he often goes up against the toughs and can at least tread water. At the very least, he’s established himself as a top-4 d-man in the league.

I like Zach Bogosian. He has a lot of tools. Unfortunately though, the toolbox never came together like that of some other Jets. I do think, though, that we'll see a good year for Bogosian this winter. In part to do with shooting percentage regression, but also because I believe that Bogosian will perform better under Paul Maurice's defensive zone structure and breakout systems.

Maybe we're being harsh or hasty in saying Trouba has surpassed Bogosian... prove us wrong Bogosian.

I think it's pretty fair to say that Bogosian has slowly dropped further below the expectations that have been set for him over the last few years. Whether that has been due to his injury troubles or it's just the player that he truly is, this is a pretty big season for Bogo. He's going to likely see a lot of top pairing time with Enstrom this season, so we will all get a chance to figure out if he is truly worth his big contract.

Zach Bogosian has pretty firmly established himself as a top-4 defenseman in the NHL. He hasn't, however, consistently shown the ability to beat tough opponents on the scoresheet or possession-wise like one would hope (and expect) a top-pairing defenseman to do, and it's possible that Bogosian will never become the bona-fide top pairing defenseman that fans are hoping for. Bogosian can hang in there in tough minutes; the next step for him will be to take on those tough minutes and consistently come out on top.

Still just 24 years old and likely to spend significant playing time with Tobias Enstrom this season, Bogosian likely has a couple of more seasons to reach that top pairing potential. But if it doesn't happen in the next couple of seasons, it probably never will.