Zone Deployment Optimization: An introduction to a new use in Corsi analysis

Using Alexander Burmistrov as a case study in using Corsi in new ways.

Share All sharing options for: Zone Deployment Optimization: An introduction to a new use in Corsi analysis

I have a series coming up soon on the Winnipeg Jets and optimizing zone deployment. When Muneeb Alam and I scraped the numbers, there was one former (and hopefully once again) Jet that came up. I decided that looking at this particular player's numbers would be both a fun exercise for me and an interesting preview for you.

Warning: this article will go deep into detail, so that I don't need to at the same extent in the future articles. Sorry about the length.

Without further ado, here is Alexander Burmistrov's face off conditional Corsi and just the surface at what I'm planning... 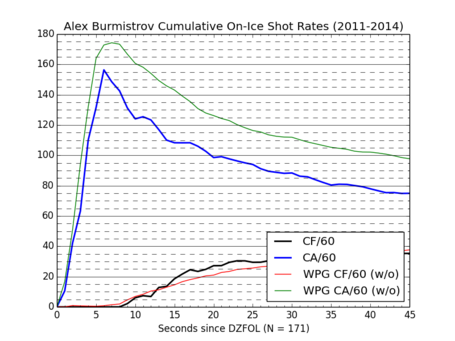 As media members are quick to mention, face offs are about starting with possession. When you lose a defensive zone face off, you are at a large territorial advantage and you have given up possession to your opponent. The general shape of these curves on the above graph (and the rest of these graphs) are typical for the respective situation(s).

The blue and green lines represent the rate of shot attempts against. It is best to be as low as possible for these numbers. The surface area between the two curves represents the overall value in terms of shot attempts (ew, calculus). Burmistrov effectively represses shots against (the best method in sustainably decreasing scoring chances against) at a very significant extent. While Burmistrov has loss the face off, Burmistrov makes best of a bad situation in minimizing the bleeding.

However, for creating offense, Burmistrov doesn't seem to push the needle much in either direction. The black and red lines are shot attempts for. Similar to shot attempts against, the lines represent rates and the surface area between the two represent difference in total shot attempts. The difference though is that higher values are preferred.

Overall, we find that Jets faired much better with Burmistrov than without when losing a defensive zone face off. While it is debatable whether or not the Jets are creating more chances than the norm, they do defend better and repress more chances against. 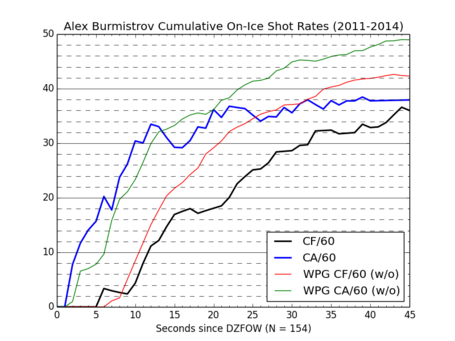 What media members fail to mention, in regards to non-neutral zone face offs and possession, is that a significant non-zero chunk of the observed effect in these face offs is due to the natural territorial advantage. If you win a face off, you still have to break out, and move half way across the ice, just to even the playing field. Even if you win a defensive zone face off, you are going to be out attempted.

For the first ten seconds, Jets are at a disadvantage with Burmistrov on the ice. The reasons for this would be best studied through video footage. It could be that the way Burmistrov takes a face off decreases his chance of moving the puck out of the zone. Another reason could be that Burmistrov struggled with the Jets break out. Of course, there is the chance that it could be his most common linemates, although this option is probably less likely. What ever the reason for the effect, it disappears quickly after the ten second mark. Burmistrov's shot repression skills return and his opponents shot rates begin to flatten quickly.

Offensively though an issue arises. Unlike in face off loses, we see Burmistrov being well below average in getting into the opponents zone quickly and generate chances. The flatline point of shot rates against seems to coincide with the moment the Jets' shot volume starts to drop from their norm. This suggests a link between the two, which is likely behavioural or systematic. 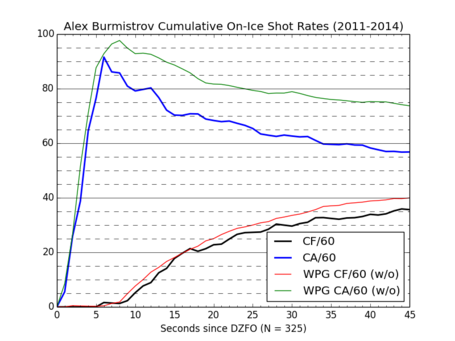 Here we have overall effect, regardless of whether or not the Jets win the face off. We can see that the Jets start off not really any better one way or the other, but in time we see large improvements due to extreme suppression while only sacrificing a bit of offense.

Alright, we should be getting a pretty good feel and can accelerate things a bit. 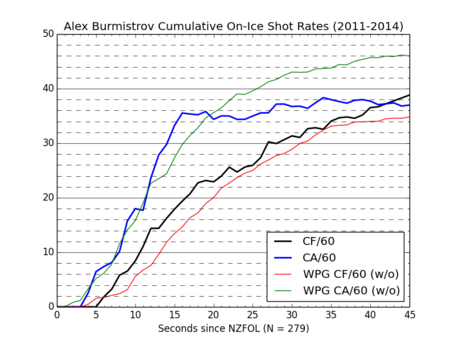 The Jets face off in neutral territory but lose the puck. Now what?

There is once again a shift in shot attempts against about ten seconds after the first few shots against. There is a small blip where Jets are allowing more attempts than normal with Burmistrov on the ice, but this quickly subsides to far below the norm. This is the only time where the Jets' shot attempt production is almost uniformly better with than without Burmistrov. 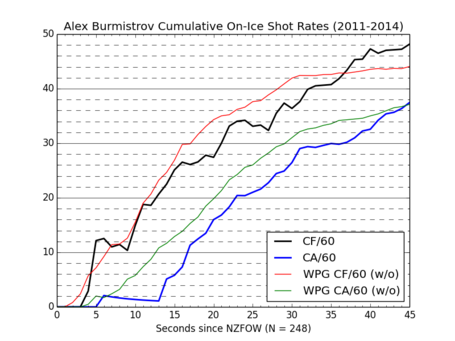 When the Jets win a neutral zone face off, there seems to be little difference whether Burmistrov is on the ice or not. The game is definitely lower in events, but the two lines shift similarly in magnitude. 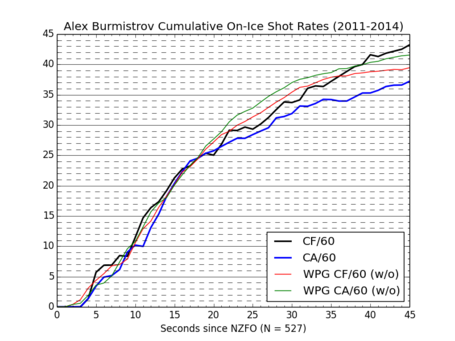 Overall there is not much difference for the first ~35 seconds after a neutral zone face off with or without Burmistrov. After the 35 seconds though there is a shift to the Jets performing better with Burmistrov on the ice, mostly in regards to shot against repression. 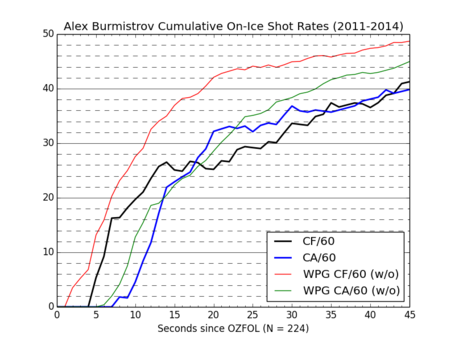 This isn't very good. The Jets fail to sustain pressure and Burmistrov's apparent effects on shot repression seems to sacrifice too much offense in promoting defense. 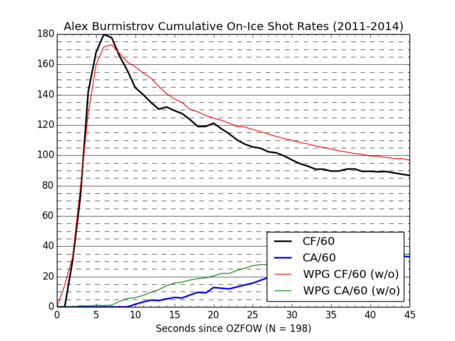 The graph seems similar to Burmistrov's DZFOL chart, but with attempts for and against switched. The level of change in costs and benefits seem to be equal, with the only real effect being a lower event game. 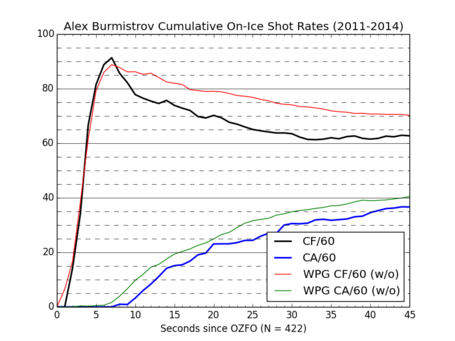 Overall for offensive zone starts, the Jets do not create as much in chances, nor do they give up as much. The overall tradeoff appears to be non-optimal though. The Jets finding themselves trapped in the neutral zone more often than usual could be a cause for these results seen here.

Zone and situation specific Corsi rates open up a whole new field of possibilities. This is where we can start to link the data with traditional techniques, such as video coaching. Another link link to study would be in microstatistics, such as zone entries, zone exits, and board battles.

Why does Burmistrov perform well in some cases but not others? Is this fixable? Is it systematic? Is it behavioural? Where does the fault lay? Burmi? Coach? Wingers? Defense? Combination?

It can also lead to optimizing puck possession potential by deploying players in situations best suited for their skills.

Now keep in mind that these are just post-face off numbers; there is still open play as well as all the shifts started with changing on the fly.