The Kids, or The Vets. Losing which group is truly worse for this team?

If you aren't too sure what this is...where the heck have you been?!?! You should probably check back to one of the last three episodes of the JetStream Podcast first. For those of you who don't enjoy that comfy crawlspace under a rock, here is the final match-up of the 'Winnipeg Jets Worst Case Scenario' showdown! 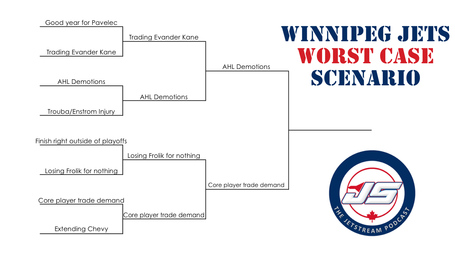 You have voted, you have tweeted, you have commented, and now we are finally able to introduce the final two contestants in what may be the most fear-inducing bracket this website has ever produced. So we once again ask you Jets fans; what's worse?

Introductions to each side of the debate have been made throughout the month on the JetStream Podcast, but here is a quick reminder of the points that have been made (both positive and negative):

Which is it Jets fans? Are AHL-demotion worthy seasons from Scheifele and Trouba, or is a core player demanding a trade the worst thing that could happen to the Jets this season?

Want to win a copy of Rob Vollman's 'Hockey Abstract'?  WE WANT TO HEAR FROM YOU. If you want a chance to win a copy of The Hockey Abstract, send a video or audio clip of you making your vote and explaining why to jetstreampodcast(at)gmail(dot)com and you'll be entered, as well as potentially featured on our next episode of JetStream!

If you choose to not enter the contest you can still vote by tweeting your choice at us using #JetStream, or voting in the poll below! Be sure to leave a comment explaining your choice.