To preview our Top 25 Under 25 series, we take a look at how some Jets prospects have developed.

A long while back, Arctic Ice Hockey founder, Gabriel Desjardins created something called League Equivalencies. Desjardins used the percentage of points per game the average player would retain moving to a new league in order to effectively order and measure difficulty differences in scoring for different leagues.

There is some predictive value in these numbers, in how they show a player who scores more effectively than their peers at one level, will likely score better than their peers at the next level. Of course, a trend is merely a trend, nothing more. There will always be examples of high scoring players who fail to make the next step, and the opposite.

However, what NHLEs are well equipped for is comparing the point productions of players across separate leagues, like a NCAA player's production versus a WHL player. There is a slight issue with league difficulty being rather fluid, changing slightly from year-to-year. Still, the numbers are good enough for rough estimates.

Just like in the NHL, a player who scores more isn't necessarily a better player, but more information is always better. 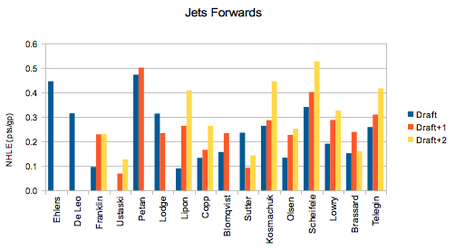 * It's always interesting to see player perceptions or draft positions versus their production levels.

* While Nikolaj Ehlers, Chase De Leo, and Nic Petan have questions due to size, their performances in junior are extremely promising.

* Ivan Telegin was a highly regarded asset that will be an unfortunate loss if he never returns to North American hockey. 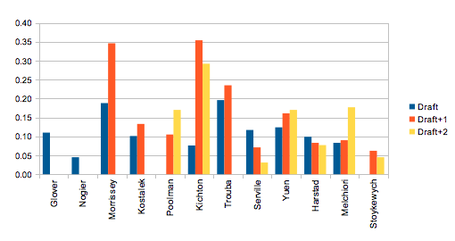 * There is an issue with defensemen relying on opportunities (like PPTOI) for point production more-so than forwards. Although, it can be said that more skilled defensemen will earn the right to that PPTOI more often than non-skilled defensemen.

* Josh Morrissey and Jacob Trouba show why they are considered blue chips with their impressive draft seasons were.  Trouba's Draft+2 season was in the NHL and would actually be off the charts at 0.45 NHLE. It will be interesting to see how Morrissey performs this year if he's stuck in the WHL since his age makes him NHL or WHL for the regular season.

* Brenden Kichton's offense after his draft season was truly impressive and is much like current Jet Paul Postma. 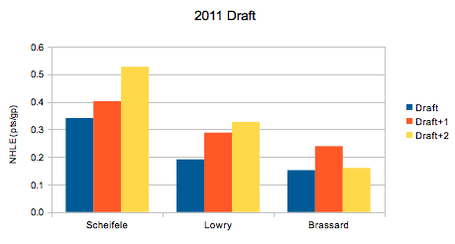 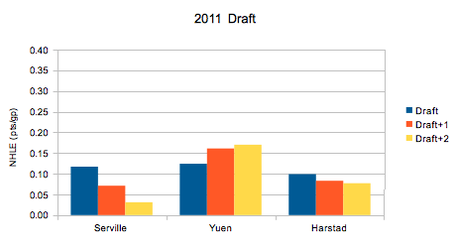 * It's not often that a player trends downward, but to have three out of six is pretty remarkable.

* When Zach Yuen wasn't offered an ELC, Chevy mentioned that Yuen's offensive game didn't develop as they had hope. Although, he did sign Austen Brassard... I doubt he's excited about Brennan Serville's and Aaron Harstad's offensive developments.

* 2011's draft only has two skaters remaining that look to have any NHL potential, a blue chip in Mark Scheifele and a chance with NHL pedigree in Adam Lowry. 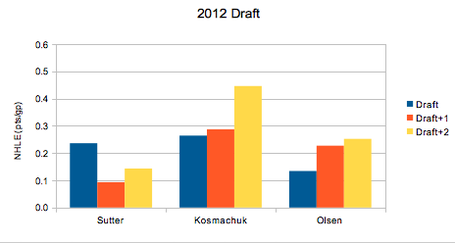 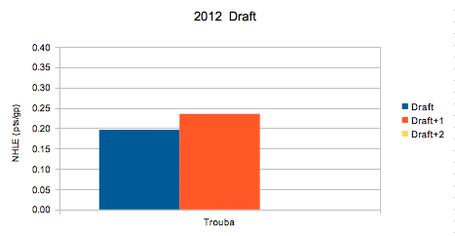 * Lukas Sutter had a decent draft season on a strong Saskatoon Blades squad; however, as the team's talent went down, so did Sutter's point production... and it never returned.

* Scott Kosmachuk was always a good value player for his draft position, but it is interesting to note that his production in his draft season surpassed Lukas Sutter while being on a rebuilding squad.

* Ryan Olsen's game has always been more about his defensive game, but some more offense would be nice.

* Cheveldayoff improved his batting percentage with the 2011's draft class. Three out of four skaters still having NHL potential after graduating from junior. 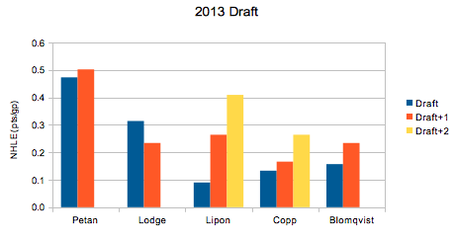 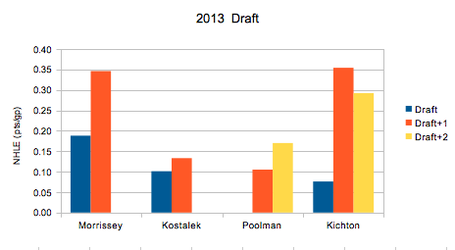 * The 2013 draft has always been my favourite for its combination of quantity and quality. So, of course, I'm going to talk about every player.

* Nic Petan has risk with his size but huge upside. Only Scheifele's Draft+2 season has surpassed *either* of Petan's Draft or Draft+1 seasons.

* Jimmy Lodge stumbled with injuries but interestingly enough that a poor season for him is at par with many of the Jets well thought of prospects. But, as we saw with Zach Yuen, expectations influences whether a player is considered to be developing well or not. Hopefully Lodge will pick up his point pace and stay healthy this year.

* Andrew Copp isn't the highest scoring player, but has been developing well and brings a lot of defensive and leadership attributes with his scoring.

* Axel Blomqvist came free as a free agent at training camp after going undrafted, and you can't complain about a free prospect performing as he has.

* Josh Morrissey had the best point per game performance in the WHL last season (defensemen) and may make noise at Jets' camp.

* Jan Kostalek is a lot like Copp, not great scorer but not a black hole, while still providing high-end defensive acumen.

* Tucker Poolman is an interesting overage pick up. He has been a top performer in the USHL, a league lower in quality than the CHL. He will be debuting in the NCAA this season where he will have up to 4 years to develop his raw tools before needing to be signed.

* There can be no complaints about getting an AHL All-Star like Brenden Kichton with a 7th round pick. When it comes to late picks, boom or bust is the best strategy. 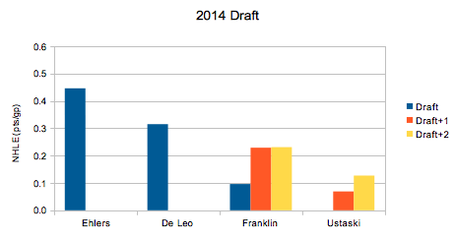 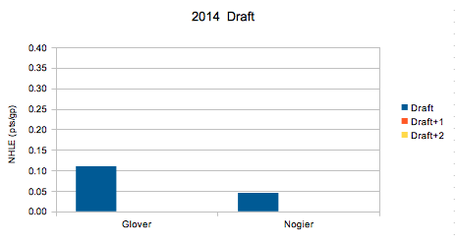 * We come to this seasons draft which doesn't have much sample to draw upon.

* Nikolaj Ehlers and Chase De Leo have both been very impressive point producers in junior, and Jack Glover has performed well USNDTP.

* Nelson Nogier will be interesting to watch as he is highly regarded but has put up essentially no offensive numbers.

* The two overage draftees, CJ Franklin and Matt Ustaski, come from lower tier leagues, but will at least have tons of time to develop in the NCAA before the Jets have to make a decision.