Kevin Cheveldayoff signs the player he should have signed instead of Chris Thorburn or Matt Halischuk.

The Winnipeg Jets sign former Calgary Flame T.J. Galiardi to a two-way contract with a NHL CapHit of 715K. So, what do the numbers say about Galiardi?

In fact, some of Galiardi's low production may be from a bit of bad luck. Galiardi's shooting percentage fell to nearly half his career norm, meaning he would normally score twice as much with the same amount of effort and input. His shot production was uncharacteristically low as well last season, although it was higher than any of the Jets' fourth line forwards mentioned above. 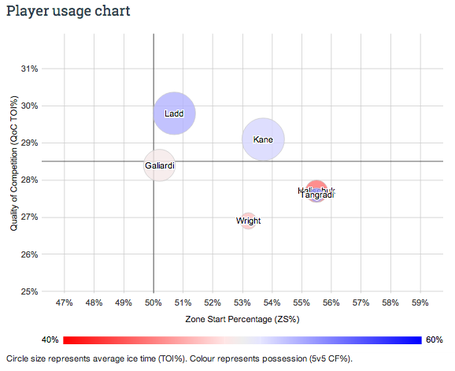 The player usage chart shows Galiardi's 2013-14 season compared to most of the forwards the Jets played on the left wing (with the exception of Dustin Byfuglien who predominately played defense throughout the season). Galiardi performed superior to the Jets depth forwards despite taking far tougher minutes.

In 2011-12 Galiardi was given a decent share of the defensive zone duties while taking a few minutes of power play and short handed minutes. Galiardi's power play time on ice has fallen, although his even strength and short handed time has risen. Having a bottom six skater who can play penalty kill or power play gives added value to the contract. 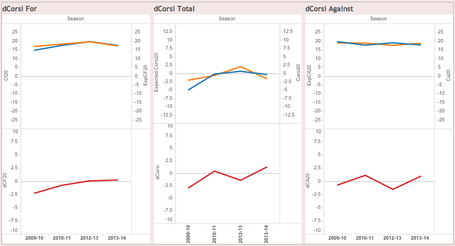 The graphs from left to right measure Corsi For, Corsi Differential, and Corsi against. The orange lines are the expected results for a league average player given the same usage. The blue lines are the results Galiardi produced. The red lines are the difference between the two.

dCorsi numbers show that Galiardi's performance has been about average relative to his usage with a slight upward trend; something that cannot be said for most of the Jets bottom six forwards. While Galiardi does not push the play at a level of a Mathieu Perreault, Galiardi is not an anchor like that of Chris Thorburn or Matt Halischuk.

We can see an upward trend in how Galiardi affects his linemates: 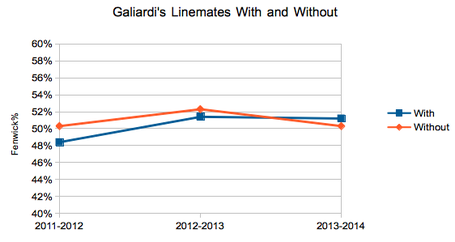 How does Galiardi fit with the Jets

For nearly every off season, the Jets issues needing addressing have been the same:

Here are how the Jets bottom rung forwards have performed over the last three seasons:

Reminder, the average performance of fourth line players and depth call-ups is a 48.1% Corsi% and 1.0 points per sixty minutes.

* Only Tangradi and Galiardi have possession numbers at or above 50%. They are also the only forwards above average for a fourth line player.

* Matt Halischuk has performed polar opposite than that of Tangradi. While Halischuk has superior point production with likely a little bit of puck luck, Halischuk's puck possession numbers are embarrassing low.

* In fact, if we adjust for zone deployment by removing the first few seconds after a non-neutral zone faceoff, Halischuk and Thorburn's puck possession is in the bottom 20 of the 380 forwards with 500+ minutes over the last three seasons. Meanwhile, Galiardi's zone adjusted Corsi% is the best of the above forwards at 143rd out of 380.

Galiardi is not an elite signing that drives the Jets into contention, but he is a good player. He is the type of forward you want to be filling your fourth line with and what the Jets have sorely lacked: an above average fourth line forward who can fill a top 9 role with injuries and not be an anchor.

Galiardi-type players are exactly why you do not sign Chris Thorburn to a 3 year contract at 1.2 million per.