Looking at how the Jets depth looks like at all levels.

It's that time of the year. News is slow. Development camps and free agency frenzy are fleeting images in the rear view mirror. The regular season floats beyond the horizon.

So, how do "Armchair General Managers" fill their time?

There are excellent resources for depth charts such as Cap Geek and NHL Numbers, but neither have prospects or AHL contracts.

Without further ado, here is a snap shot of the Winnipeg Jets at this moment (August 15,2014) in time: 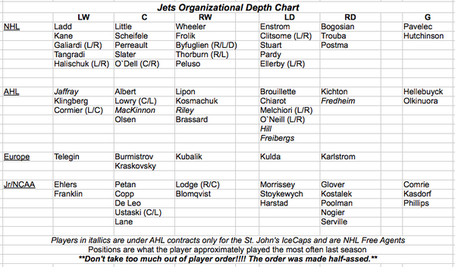 * There are some players who play multiple positions. For the most part, I've placed players where they play the most last season, while noting in parentheses their options. The exception of course is Byfuglien, who played mostly RD last season, but Paul Maurice has said will be playing on the wing to start this season.

* As noted in the image, the order is somewhat how I feel the Jets order players in their respective areas. There are multiple players where there could be some debate for sure. Whether the order is correct or not really doesn't matter that much.

* Jason Jaffray, Kyle MacKinnon, Blair Riley, Jordan Hill, Kris Fredheim, and Rafs Freibergs are all on AHL contracts for the St. John's IceCaps only. Any of these players could be offered a NHL contract, removing them from the Jets organization. My guess would be that the Jets and/or IceCaps add a few players for depth, likely a few forwards and a goaltender.