I've tried keeping the statistics to a minimum for the series; however, Kichton is predominately extolled for his point production. I thought it best to compare Kichton's production and development to his closest comparable, Paul Postma. 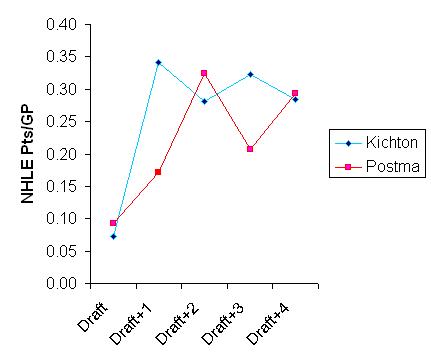 Neither Kichton nor Postma had an impressive draft eligible season. Kichton went undrafted, but Postma with his superior skating and size led to Atlanta using a 7th round pick.

Both players improved their point production, but Kichton's exploded. There are those who believe that Kichton benefited from favourable on-ice shooting percentages that season, predominately due to his production that year being superior to both of his next two seasons. Whatever the reason, scouts took note and Kichton was drafted in the 5th round by the New York Islanders.

Postma's production continued to improve in his Draft+2 season, but Kichton's took a step back (again likely due to the on-ice sh% being unsustainable the previous season). Both still posted impressive numbers.

Postma was granted an Entry Level Contract, and moved up to the AHL. Postma's NHLE production took a step down, which is the norm for players who step up to the next level. Kichton, however, was not as fortunate and returned to the WHL as an overage player. Kichton did dominate the league and was awarded WHL MVP for his endeavors. The Islanders offered Kichton a contract, to which his party countered, but the organization was not willing to negotiate. Kichton re-entered the draft, where he was selected in the 7th round by the Jets.

The next season Kichton played in the IceCaps where he bounced between the first and second pair, played top power play minutes, posted top production for rookie defensemen, and was a second round addition to the All-Star squad.

Essentially, this is all to say that Kichton has tracked similarly to Paul Postma in point production, but there are reasons why Kichton's production may not be as impressive. There was a possible shooting percentage inflation in his Draft+1 season and his Draft+3 season was as an overage player.

This should not take anything away from Kichton. His development and production have been excellent even when taking those caveats into account. He's also been praised for improving his defensive game immensely by Jets management. Kichton is a legitimate prospect with NHL potential still in his Draft+6 year.

Still, it seems that most are still a tad wary on Kichton, given his production is not quite as good as Paul Postma, and that he lacks tools, such as size, shot and skating, that helped Postma earn his way into the NHL.

Comparable to Marc-andre Bergeron, Torey Krug, or Cody Franson. Needing sheltering at the AHL isn't a good sign for the big point producing defenseman. He also has at least four right handed d-men who are capable on the power play in front of him on the depth chart including Byfuglien, Postma, Bogosian and Trouba. Will he be able to overcome his shortcomings? Is he an asset that can be moved for other pieces?

Kichton was known for his offense at the junior level, but there were some question marks about how his game would translate to the pro level. He answered those questions last year. Brenden finished the season tied for 8th in AHL rookie scoring, first in assists. He was also voted to the All Star game. His production did slow some at the end of the season, but this is often the case for junior players who transition to pro hockey. More points and perhaps a brief NHL call up could be in the cards for Kichton this year.

My opinion is very middling on Kichton. I believe him to be better than those who are down on him due to his size and skating, but am still hopeful he can make the next step. Regardless, he is a solid prospect and has tracked far better than the norm for a 7th round draft pick. It will be interesting to see what he can do and how much of a chance he will be given, with a very similar usage-type player blocking his way in Paul Postma.