When the puck drops at 7:30 CT tonight, the St. John's IceCaps will face a formidable foe - the Texas Stars.

The IceCaps were spared the challenge of facing the top seed in the Eastern Conference when the Manchester Monarchs were eliminated in the first round. But the highest regular season goal differential for any team in the American Hockey League was owned by the Texas Stars, at a whopping +77 - almost a goal per game.

If the advanced stats were readily available for the American Hockey League, the Texas Stars would be featured. I did some spreadsheets to come up with these stats, using old-fashioned shots (and goals) for and against: 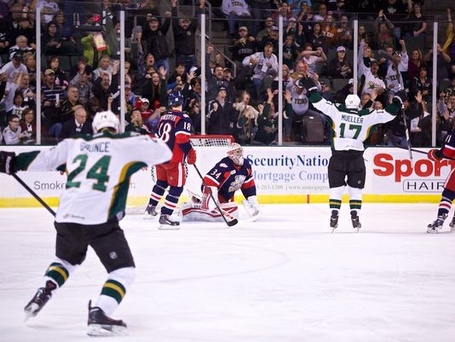 In case you think these mustangs might have slowed down in the playoffs, they're just getting their legs, as the shot differential has increased during the playoffs, to 37 shots for per game, and only 26 shots against. That's 11 shots per game over their opponents during the 2014 Calder cup playoffs - roughly equal to one period of extra shots.

That isn't just good puck possession. That's like locking up your nemesis in the county jail, just for fun.

Is this the work of a couple of outriders on an average band of gunmen? Nope. Through the playoffs so far, 10 players have 3 goals or more. Oh, and they're fairly healthy, with two hombres back from recent injuries - Dowling (C, 11 points in 9 games, 7 games missed), and Ritchie (RW, 7 points in 8 games, 8 missed).

They are potentially vulnerable to injury in net, since they have one excellent goaltender injured already - Jack Campbell. However, Christopher Nilstorp has been carrying the load between the pipes, with a .914 save % in the playoffs (.918 in the regular season).

One of their solid defensemen is Patrik Nemeth (plus 19 during the regular season, plus 2 in the playoffs). Derek Meech (yes, that same player who was with the Jets in 2012-13) supplies offense from the blue line, with 11 points in the playoffs.

Top scorers include Mike Hedden (LW) and Travis Morin (C), with 15 points each.

So what happens when the Stars pull up in front of some IceCaps? Well, they didn't meet in the regular season. In fact, they've never met in their franchise histories!

So what is it that's moved the IceCaps all the way from Newfoundland to the heart of Texas?

In a word, accuracy.

The IceCaps were right near the middle of the AHL "range", in terms of shot differential - shots for, shots against, and differential. They outshot their opponents 30-29 in the regular season, on average. They've improved slightly in the playoffs, outshooting their opponents 33-30.

Andrew Gordon and Jason Jaffray have been the key offensive threats for the IceCaps, although Eric O`Dell has found gold around the net in the playoffs, with 9 goals. The IceCaps offence has also been powered by the blue line, with four defensemen having 6 points or more in the playoffs - Will O'Neil (13), Zach Redmond (11), Josh Morrissey (8) and Brenden Kichton (6). Morrissey made a highlight reel pass on Adam Lowry's goal in the IceCaps' 5-0 victory over the Wilkes-Barre/Scranton Penguins. Morrissey, a rapidly improving young player, could be a key for the IceCaps in the finals.

But the huge story for IceCaps has been the outstanding play of Michael Hutchinson in net. He was solid in the regular season, coming on for the injured Eddie Pasquale, but he's been red hot in the playoffs, with 3 shutouts, a 1.61 goals against average, and a staggering .946 save percentage in the playoffs. The IceCaps have allowed only 26 goals in the playoffs (excluding 2 empty net goals). That's 10 goals fewer than the Texas Stars have allowed in 16 playoff games (excluding empty net goals). Hutchinson has looked Dryden-esque, with quick pad movements to cover the net from corner to corner. It's hard to lose when your goalie stops 19 out of 20 shots, on average! But can the 24 year old netminder, just promoted from the ECHL during the year, keep this hot streak going?

Penalty killing has been another strength for the IceCaps in their run to the Calder Cup finals. They're running at a 91% efficiency rate on the PK, going 100% (32 for 32) in the conference finals series. Lowry has played a key role for the IceCaps' PK team.

The Stars are also excellent on special teams, although their very high ratings in the regular season have dropped slightly in the postseason. They are dangerous on the PK, having scored 10 times while shorthanded. This could be an area of concern for the IceCaps, who allowed 16 shorthanded goals themselves during the year.

Keys for the IceCaps:

1. Take care of business in their own end, to help Hutchinson stay hot all series long.

2. Keep their defensemen involved in the offensive zone, to maximize scoring opportunities.

3. The vets - Gordon and Jaffray - need to have a big series.

Keys for the Stars:

1. Nilstorp needs to have a good series, and stay healthy.

2. Play their puck possession game, to stifle the IceCaps, and limit the offence from the IceCaps' defensemen.

3. Justin Dowling is a young star on the rise. If he has a big series, it could be a short one for the IceCaps.

4. Derek Meech might be ready to break out for the Stars in this series. The former Jet might have that extra gear ready for the Jets' AHL affiliate.

This is like an old-time world series, with no prior meetings in the history of the 2 franchises. I'm cheering for the IceCaps (of course), but the puck possession numbers for the Stars are staggering. The Stars begin and end the series at home, with 4 games in Texas. With two good teams, anything can happen in a 7 game series, especially when a goalie is very hot. I'm picking the Stars in 7 games, because of their incredible edge in shots for and against. If they continue to own the puck, it would take a Hutchinson miracle for the IceCaps to win the series. Texas in 7.