Matt Halischuk joined the Winnipeg Jets with little fan fare. Oddly, it wasn't only the fans that slept on the move - the team didn't even acknowledge his signing. Fans stumbled across the fact that Matt Halischuk listed on the team's website and started asking questions. It was only then that the team made an announcement. After seeing him play, many fans bought in to the Hustle-chuk moniker, but there is more to the NHL game than Hustle. This makes Halischuk and interesting player from a statistical perspective.

These numbers are pretty straight forward. Halischuk was sheltered, both in terms of zone starts and quality of competition. He obviously wasn't used as a specialist on either the PP or PK units - he perhaps could have picked up some more short handed time though. Ninth in even strength ice is interesting too. That places Hali firmly within the Winnipeg Jets top nine. 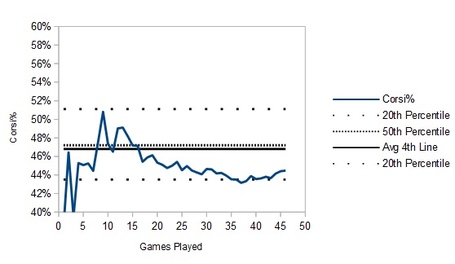 The Corsi numbers are bad, like real bad. Like near worst on the team bad. Both Corsi for and against tended to tank with Halischuk on the ice. The dCorsi numbers aren't pretty either. From a statistical perspective, Matt Halischuk is a disaster at 5 on 5.

Matt Halischuk brings some offense and some scoring ability. He is a massive defensive liability at 5 on 5 though.

It might be time to give a prospect a shot on the fourth line wing and Hali really shouldn't be a third line player. Lose.

603 players have logged 2000 5 on 5 minutes over the last six seasons. Only 11 of these 603 players have posted a worse Corsi for percentage than Matt Halischuk. Those are simply raw Corsi numbers. They don't offer context in terms of zone starts, matchups or linemates, but that stats still stands out.

By this same measure (6 year run), the Winnipeg Jets had three of the 30 worst players in the league logging regular minutes last year. A fourth player, Tanner Glass, has also logged minutes here. Something something, the bottom 6, something something. Scroll way way way down to the bottom of this list to see for yourself.