When Kevin Cheveldayoff traded for Michael Frolik, Arctic Ice Hockey got pretty excited. The underlying numbers indicated that Frolik was a player that tilted the ice in his team favour, improved his linemates, and struggled scoring due to low on-ice shooting percentages and lower quality of linemates... AKA, another Alexander Burmistrov.

Frolik was just one point shy of his second highest NHL season best, although the 2013-14 season was best for even strength points (both totals and per minute). Frolik has always been a large shot volume player; however, this season Frolik posted more normalized shooting percentages after struggling at 3.6% in Chicago.

Frolik's zone deployment was average for the team. He received a boost in even strength and power play time at the cost of reducing his penalty kill time from years prior. The only real critique one could have on Frolik is that he did not produce well on the power play, despite the additional TOI. If Paul Maurice keeps Frolik with Andrew Ladd and Bryan Little, we will likely see a rise in Frolik's QoC next season. 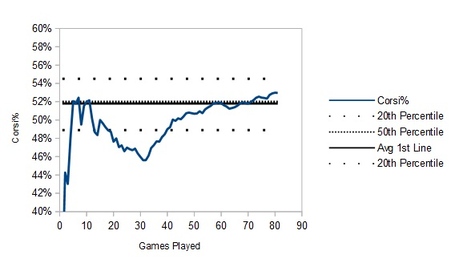 Taters pushed the play well despite a lack of cushy minutes and rotation of roles and linemates. In fact, his underlying metrics were above average for a first line forward, which is what he was deployed as by season's end. The Jets were a bit weird with their TOI allocation, with 7 forwards being given first line minutes, and everyone else experienced almost none.

2013-14 was a personal best for Frolik in scoring and advance metrics. We may see some reduced scoring next season, although extra power play time may counteract any regression. What really matters was Frolik was able to improve the Jets shot metrics, making up for the loss of Burmistrov, although was able to earn the trust of his coach so his positive on-ice results were magnified, unlike Burmistrov.

Frolik is a restricted free agent this summer and the Jets better keep him. The biggest problem outside of starting goaltender is a lack of players who improve possession. The extra added ability to finish is nice, although not aa pressing of need. Of the Jets 15 skaters to play 25% or more of the season, only six were above 50% for Corsi, and two of them were under severe sheltered minutes. Stanley Cup finalists New York Rangers only had all but 4 and those were under tough zone starts. The other finalists, Los Angeles Kings, had an entire team above 50%.

While Frolik's counting statistics suffered from usage in Chicago, underlying statistics always showed Frolik to be a plus player. We can see Frolik's affect on the team by comparing his seasonal numbers relative to his team's without him on the ice. 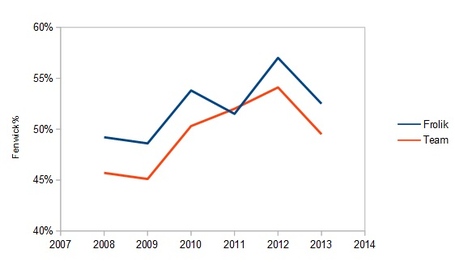 Even when he was on Stanley Cup calibre teams, Frolik was pushing the play well.