Why Plus/Minus is the Worst Statistic in Hockey

Demonstrating through use cases why plus/minus is the worst statistic in hockey...and maybe pro sports.

Share All sharing options for: Why Plus/Minus is the Worst Statistic in Hockey

Alexander Ovechkin, the Washington Capitals' superstar forward, led the NHL with 51 goals this season.  It wasn't even close, either.  The next guy, Corey Perry of the Anaheim Ducks, was eight goals back.

In other words, Alexander Ovechkin is pretty darn good at hockey.

But there's been a lot of discussion this season about plus/minus, particularly Ovechkin's.  You see, Alexander Ovechkin finished with a team-worst -35, and there were only two guys in the entire NHL worse than that: Steve Ott and Alexander Edler.  On one side of the argument, Ovechkin's critics say that he's lazy, a quitter, and his defensive deficiencies outweigh his scoring ability to make him a net-negative hockey player.  These critics frequently point to his plus/minus as evidence.  On the other side of the equation, supporters are quick to dismiss Ovechkin's plus/minus.  They instead point out that Ovechkin leads the league in goals and that his ability to create shots is second to none.

Winnipeg Jets fans are no stranger to this argument.  We've heard it time and again, usually in reference to Dustin Byfuglien or Evander Kane.  Critics point to Byfuglien's plus/minus as evidence that he's a bad defenseman.  They use Kane's plus/minus to argue that he doesn't score enough to outweigh the chances given up.  Supporters argue that plus/minus is so heavily dependent on things like usage, save %, and shooting % that it's pretty much meaningless.

As more attention has been thrust on plus/minus recently, I've had enough.  I just can't take it any more.  Plus/minus is quite possibly the worst statistic in all of hockey - perhaps even all of sports - and the purpose of this article is to demonstrate why.  So let's hop to it.

In other words, suppose that Player A and Player  B are absolutely identical in every way.  They do the same things (skate, pass, shoot, hit, etc.) identically, create the same chances, allow the same chances, play with the same teammates, and play against the same competition, all in exactly equal proportions.  They're the Sedin twins, if both Sedins were Henrik.

Now suppose that Player A plays 20 minutes a night, while Player B plays 10 minutes.  How does their plus/minus compare? 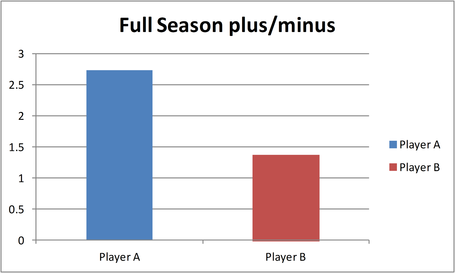 But is Player A actually better?  Not even a little bit.  He's the exact same.  He just plays more.  Clearly, our assumption that "plus/minus is an accurate representation of performance or ability" is a faulty one.

Let's go back to the drawing board.  Player A and Player B are once again identical in every way, shape, form, ice time, and more, all in exactly the same proportions.

There's no real rhyme or reason to it; maybe the goalies just happened to get lucky a handful more times than not for Player A as compared to Player B.  Maybe the goalie just whiffed on a handful more pucks when Player B was on the ice.  These things totally happen, as fans of this franchise well know. 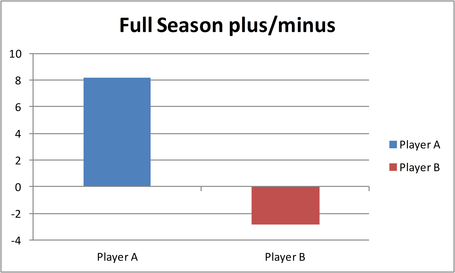 Pretty massive difference, right?  The way plus/minus tells the story, Player A is a heck of a lot better than Player B, to the tune of about 11 goals per year.  But Player A and B did everything the exact same way in the exact same proportions.  Player A's not actually any better at all.

Let's go back to the drawing board one last time.  Player A and Player B are once again identical in every way, shape, and form, and ice time, all in exactly the same proportions.

Again, no real rhyme or reason to it; let's just suppose the opposing goalie happened to get lucky a handful more times than not when Player B was out there and whiffed on a handful of pucks when Player A was out there, which totally happens. 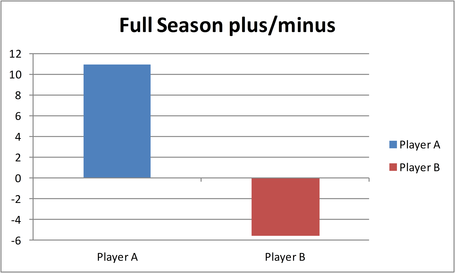 Plus/minus again indicates a pretty significant difference in the quality of the player; Player A again appears to be a heck of a lot better than Player B.

But again, Player A and B did everything the exact same way in the exact same proportions.  Player A's not actually any better at all.  He just got "luckier" than player B.

What does it all mean?

In short, plus/minus is highly variable, there are countless factors that influence it, and more of them are outside of an individual player's control than not.

Two teammates doing everything absolutely identically to one another can see huge variance - well over 100% - in their plus/minus based on factors outside of their control like ice time, their goalie's performance, and the opposing goalie's performance.  You may be wondering if players such as those in the examples above exist, and the answer is absolutely, yes.  Dustin Byfuglien's goalies posted an .888 on-ice save percentage at even strength this season, Byfuglien's on-ice shooting percentage is 7.7%, and Byfuglien was playing just under 20 minutes/60 at even strength until his position change.  These kinds of percentages are totally normal.

Combining only the factors in the examples above, we could easily be talking upwards of 30 goals/season just due to usage and plain old dumb luck, and a single season's worth of games isn't close to a large enough sample size for the law of averages to even things out.  And that's just the beginning.  Matters only get cloudier when adding in other factors.  For example, an excellent power play player like Ovechkin or Byfgulien gets no credit for offense created on the PP. The Washington Capitals scored 62 power play goals with Ovechkin on the ice this past season, and allowed nine against; despite going +53 on the scoreboard, that adds up to a -9 for Ovechkin in the plus/minus column. (Byfuglien, in case you're curious, accumulated a -4 on the power play this season).  And we haven't even begun to talk about things like quality of competition, quality of teammates, zone starts, face-off wins, or about a hundred other factors outside of an individual player's control.

The take-away, friends, is that plus/minus is completely unreliable.  It's meaningless.  It's even worse than meaningless, because belief in plus/minus actively damages attempts at meaningful analysis.  So please, let's stop using it.