Super-Rookie Jacob Trouba took hold of a Winnpeg Jets roster spot and rolled with it. From early in the season Trouba was given a load of trust and if not for an injury he may have been in the mix for the NHL's rookie of the year award.

Trouba missed almost a quarter of his season with a neck injury. That hurt him in terms of counting stats, but he still put up some high end numbers. 29 points was good for third in scoring among rookie defenders and 52nd among all defenders. Those are some pretty high numbers for a rookie. Shot production was high end - 30th among regular defenders (500+ minutes). Trouba's per game ice time ranked 44th in the league. His +5 penalty differential was among the best in the league. Only four defenders posted a better penalty differential (this was a bit of a surprise as Trouba took many stick infractions at the college level).

Holy crap! The Winnipeg Jets coaches are a bunch of meanies. Jacob Trouba saw the second toughest zone starts on the team. He was also used on the team's first penalty kill unit. He was however rewarded with a load of powerplay ice (even though he didn't produce at a high rate). Quality of competition was middle of the pack. Quality of teammates was as well. 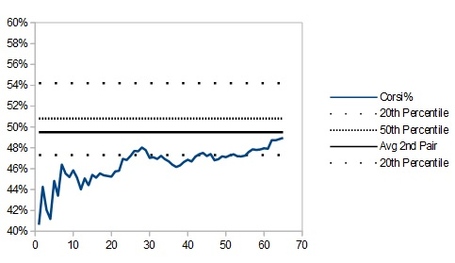 A Corsi percentage of 49% isn't terrible especially given Trouba's deployment. The slant towards the defensive zone is a known compressor of Corsi. Rookie defenders rarely dominate versus top opposition. What makes these numbers even more remarable is that Trouba spent much of his season paired with Mark Stuart - who in his time as a Jet has been a black hole of possession.

Trouba's shot creation truly elite. As mentioned above Trouba was 30th in defensive shot production, but in terms of total shot attempts (iCorsi/60) Trouba ranked 11th among defenders - the discrepancy between those numbers suggests he should work on his accuracy a bit, but even with a high volume of missed shots, Trouba ranked 13th in 5 on 5 scoring per minute.

dCorsi against looks bad, but Trouba's numbers are far superior to those of his main D partner. Everything in the numbers suggests Jacob Trouba was carrying Mark Stuart through the season as opposed to the other way around. It isn't beyond the realm of possibility that the Winnipeg Jets super rookie could take over top pairing duties along side Tobias Enstrom next season. In fact, the team might be better for it if he does.

This kid had a phenomenal rookie season. The numbers aren't all there yet, but they are trending in the right direction. If he continues his upward trajectory - a change of partners might help - we could be talking about a bonafide number one defender and perhaps perennial all star in a few years. Here is to hoping.

Bonus: How good is Trouba and how much did he pull up Stuart