Adam Pardy will not be testing unrestricted free agency this off-season after re-signing with the Jets.

Share All sharing options for: Winnipeg Jets re-sign Adam Pardy to a $700,000 deal, let others walk.

One day before the drama of Free Agent Frenzy the Winnipeg Jets have inked one of their own soon to be UFAs. Depth defender Adam Pardy has been inked to a well earned one year contract. While Adam Pardy may not be the kind of signing that blows the doors off with excitement, he did an admirable job in a sheltered fourth line role. Adam Pardy was also able to contribute on the penalty kill, which wasn't common place among Winnipeg Jets fourth liners.

What does the signing mean for the Winnipeg Jets? 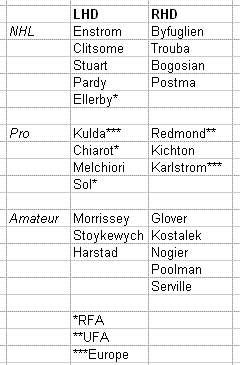 Hard to say, but even if you ignore Dustin Byfuglien the Jets now have seven defenders under contract for next season. That could mean they are close to finished at the position. If that is the case, Winnipeg Jets fans should be concerned. It is also possible that the Jets could start Pardy in the AHL as they did a season ago.

Further the the Pardy extension, the Winnipeg Jets elected not to make a couple moves:

The #NHLJets will not be issuing a qualifying offer to Matt Halischuk, allowing the winger to become an unrestricted free agent

Been told that F James Wright has not received a qualifying offer from the #NHLJets yet. Deadline is 4 pm CT today or he would become UFA

No word yet on what they have elected to do with Keaton Ellerby. If they offered him a qualifying offer it would essentially mean the Jets are returning all eight defenders from last year's squad.

Michael Hutchinson and Eric O'Dell have been qualified and are very likely to be back next year.