James Wright is a player who gained immense popularity in his first season as a member of the Winnipeg Jets. The numbers weren't always great, but his speed, hustle and a memorable tilt or two stood out to people. He even potted a couple goals.

James Wright scored zero goals in 59 games. It is really hard to get past that number. Shot production was low relative to other fourth liners. Shooting percentage was zero. A positive penalty differential is likely reflective of his hard work and speed game.

James Wright was given an offensive zone push - this comes as a bit of a surprise. Even strength time on ice was low - although lower under Paul Maurice. Powerplay time was understandably low, but penalty kill ice was frequent. Effectiveness on the PK remains a bit of a question mark. 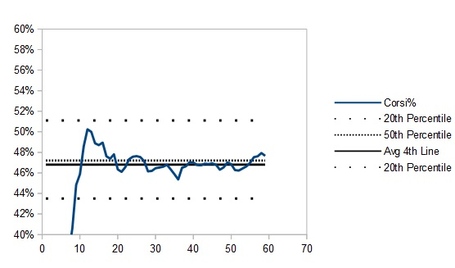 The Corsi numbers aren't great, but they aren't the telling tale here. James Wright's dCorsi split is flat out stunning. Shot attempt suppression is top notch. Shot creation is incredibly low. Like really, truly, incredibly low. The net result sits in the minus.

Zero goals scored turned James Wright into a bit of a whipping boy for both the team's lack of depth scoring and Noel logic. Wright was a solid defensive presence at 5 on 5, but his offensive game really really really needs work.

The Winnipeg Jets roster has featured too many fourth line players for too long and they already have a full allotment for next year with Anthony Peluso, Jim Slater and Eric Tangradi under contract. And that is before we consider AHL graduates and free agency. Odds are Wright's time with the Jets is done.

Bonus: It is possible