Blake Wheeler had a career year in his third wearing the the dark polar blue.

These numbers are good. Very good. Wheeler hit career highs in points and goals and he accomplished this without inflated shooting percentages, either personal or on-ice. Wheeler has steadily increased his 5v5 shot attempts per minute in every season since his first, and thus far there has been no signs of slowing down. This is a good sign that Jets should be seeing solid offensive numbers from Wheeler for a while.

Wheeler gained a solid offensive zone push, which is what you want from your most offensively gifted player. Only Evander Kane surpassed Wheeler in even strength minutes and Wheeler also played on the top power play unit. Wheeler was given some penalty kill time and he has been pretty solid at it historically. 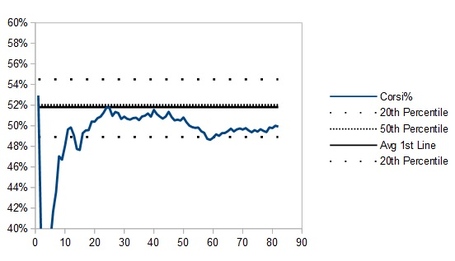 All players are not good at all things. There is no doubt that Wheeler is the Jets best offensive player when it comes to scoring points; however, Wheeler has never been an elite player at out possessing his opponents like that of Andrew Ladd, Bryan Little or Michael Frolik. The dCorsi numbers indicate Wheeler increases shot volume, but also struggles in repressing shots against. That doesn't diminish what he does. Possession only counts for so much unless you have players who can put the puck in the net.

Some people act as if number crunchers view Corsi as everything and all thing, but this is not true. These particular type of players can be useful. They can turn a possession line into a scoring line if you put them with good two-way players (like the famous LLW line) or score in bundles with other like-minded players given large offensive one starts.

Keep duh. Ladd, Little, Wheeler, Frolik, Kane... These are five excellent pieces that can be the core of a deep top nine. The issues are the Jets have struggled in creating depth beyond these players as support. If Wheeler is to be separated from Ladd and Little and still be effective, it would be best if the Jets could form a solid possession third line so that Wheeler's line (likely with Mark Scheifele and one of Dustin Byfuglien or Evander Kane) can get the Sedin twins treatment with a huge offensive zone push.

Bonus: Wheeler's evolution into a shooter

That looks like a very linear climb. Quite interesting. Wheeler may be evolving himself into a consistent goalscorer at this rate... although he is a large distance away still from the 22-25 shot attempts per 60 minutes level of Evander Kane.