Read this and remember that Chris Thorburn was given a spot in the Winnipeg Jets top six when Evander Kane was injured. Then also remember that many members of the media said that this was a good idea.

Eleven points is not bad for a fourth liner who only played 55 games, although there is a good amount of evidence that this production is unsustainable for Thorburn. This season Thorburn posted his second highest 5v5 sh% and highest on-ice sh% of his career. More pucks trickled into the opposing net per shot than the average second line in the NHL sees... probably not going to stay like that. So after four seasons of posting points per min lower than the average fourth line player, it is okay to be skeptical when Thorburn posts a season above that average. 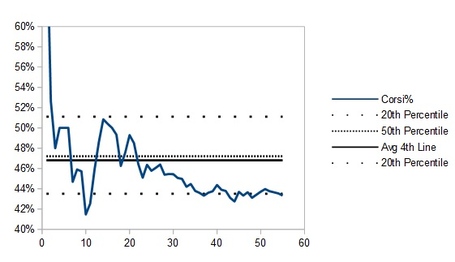 Those numbers do not paint a pretty picture at all. Chris Thorburn has killed puck possession and the Jets get consistently out shot when he is on the ice. These numbers are actually the worst for all Jets forwards.

The NHL is evolving into a league where all players must provide some sort of on-ice results type value. As fourth line players tend to be least skilled, it is best to get players to specialize in particular functions. Thorburn doesn't seem to provide any. He doesn't score enough to be a bottom 6 support scorer. He drowns in average 4th line difficulty minutes, so being a defensive zone specialist to help push scorers in offensive zone is out of the question. He can't help on the power play. He can't help on the penalty kill.

He apparently is a good character player and well liked, so maybe the Jets should hire him in HR as a dressing room hangout guy... just don't put skates on him please.

Bonus: Why Corsi% is important for fourth line players

So why care about Corsi% then? 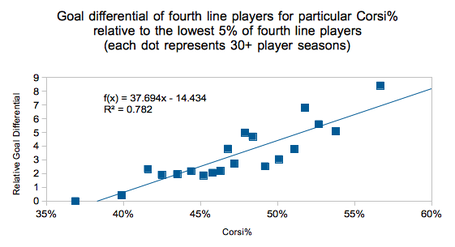