Eric Tangradi is an interesting player for the Winnipeg Jets.

Eric Tangradi was generally on the fourth line for the Winnipeg Jets during the past season. He had limited ice time, averaging only 8.5 minutes per game.

Consistent with the limited, sheltered usage of the fourth line, he had a high percentage of offensive zone starts, and generally faced the opposition's third or fourth line.

Even with his limited ice time, there are some interesting stories in Eric Tangradi's statistics... 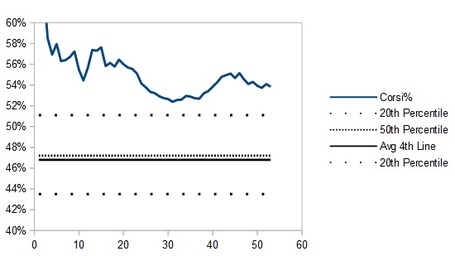 Despite his limited, sheltered usage, Eric Tangradi was an effective player for the Jets. The Jets were good at controlling the play while he was on ice, with 53.8% of shots directed at the net. In fact, the Jets were 4% better in terms of overall possession when Tangradi was on the ice - although the sheltered minutes and offensive zone starts need to be factored into this statistic. This wasn't just a statistical aberration - Tangradi had about a 55% Corsi in his two years with the Pittsburgh Penguins. He's never been below 50%.

How is this possible with a forward who has never had more than 6 points in an NHL season? Clearly he's done a decent job of limiting opposition shots and goals. I must say that I was mildly surprised by the statistics, since my own perception of Tangradi was not that of a defensive forward. But the fact is, Tangradi did a good job of keeping the puck in the opposition end, more often than not. It's interesting to note that Tangradi was generally a good scoring forward in his junior and AHL career. Despite the lack of offence, he appears to have made a modestly positive contribution for the Jets' fourth line.

Eric Tangradi hasn't achieved much in terms of goals and assists, but he's helped the Jets fourth line control the overall play in their limited minutes.

I would say keep, but my own opinion is the Jets need to get better depth and effectiveness on their third and fourth lines. He might be one of the better players among the group that the Jets employed on their fourth lines last year. I would keep him instead of Wright, for example, but I'm hoping the Jets acquire some other players that can make Tangradi a depth player.