Twenty seven games played is a problem. Slater needs to stay healthy next year. He also needs to score more. One goal and one assist in twenty seven games is simply not enough. Stater logged normal fourth line minutes and produced shots at a fair clip, but his shooting percentage was way down. When his percentages bounce back the numbers will surely look a little better.

Noel long used Slater as a defensive specialist. As the team's best face off man Slater is entrusted with many draws in the defensive zone and on the penalty kill. The end result is tough minutes for Jimmy. 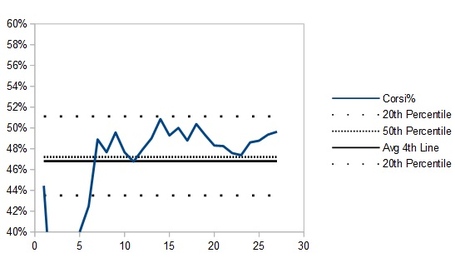 The raw Corsi numbers aren't horrible, especially given Slater's deployment. There was not enough sample for dCorsi this year, but historically Slater has bad dCorsi numbers, which isn't too unusual for FO specialists.

This combines the last two seasons, since there weren't too many games played between the two: 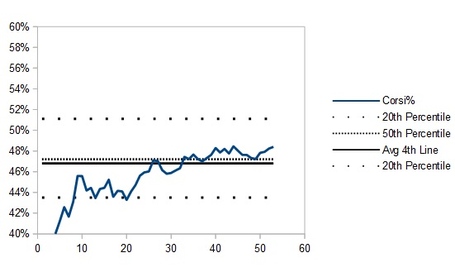 Jim Slater was once again the Winnipeg Jets' best fourth liner, but there is little statistical evidence to suggest his play is a true for this team. All in all, meh.

Slater is under contract for one more season, so he likely sticks. Should he be retained beyond that? Probably not. Better players are available for fewer dollars every year and Jim will likely always carry injury concerns from here out.

Corsis and WOWYs. Jim Slater is an interesting case from a numbers perspective. They eye test says he is often the best player on his line, but he still has some obvious deficiencies. Mainly getting lost in the D zone and losing assignments. He also struggles to make anything close to a tape to tape pass; this kills possession. Slater is used as a D zone specialist, but he doesn't perform above expectation in these situations. Slater is used on the penalty kill, but year after year he allows both more shots and goals against than most.

Is Slater miscast as a defensive specialist? Is he credited too much for his obvious compete level? Is his deployment truly that rough? Or is he perhaps dragged down by his linemates? It could be a combination of these things, but it is worth noting that Slater is consistently saddled with horrible possession wingers (Tanner Glass, Chris Thorburn and James Wright are among the worst possession players in the league over the last three seasons). The same is true about Slater (and Matt Halischuk - the Jets bottom six is stanky).

It will be interesting to watch the numbers if the Winnipeg Jets can improve their depth and surround Slater with quality players.