Kevin Cheveldayoff traded the Winnipeg Jets 2015 2nd round pick for Devin Setoguchi. Let's see how much value the Jets earned from that.

Setoguchi was brought in to supplement the Jets offense. He unfortunately put up less points than any of Alexander Burmistrov (28), Nik Antropov (35), or Kyle Wellwood (47) did in the Jets last full season. Setoguchi's shot production was not bad, but not good.

Setoguchi's usage was essentially middle-of-the-road type minutes. He was also near league average for zone starts, difficulty in linematches and quallity of linemates. He averaged on the third line for even strength minutes and was also eventually kicked off the 2nd unit power play. 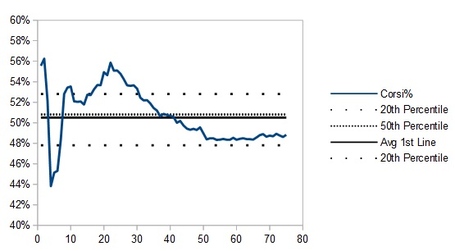 Devin Setoguchi started the season on a line with a struggling rookie centre. Olli Jokinen was eventually swapped for Mark Scheifele, and the line did okay as sheltered scoring line, although Evander Kane was doing most of the lifting. Kane was then injured and the Jets placed Chris Thorburn on the second line. Setoguchi ended up with a 43% Corsi% and a 33% goal% (a variation of 5v5 +/-). It's not like we called it though or anything.

Back to Setoguchi, the numbers are poor, but not as poor as Matt Halischuk, James Wright, Anthony Peluso, or Chris Thorburn. dCorsi numbers suggest Setoguchi brings some value with increasing shot volume for the team, but is far below average in suppression.

Setoguchi struggled to create offense at even a third line rate, but was given second line minutes. His two-way numbers were below average for league, team or usage, but there are far worse in the league and even on the Jets.

The simples way to say it is: Setoguchi was not as bad as many Jets fans like to pretend when complaining, but was still bad.

Jets need less poor possession and scoring players, even if Setoguchi is still better than most of the Jets weaker players. No team has all good players, but -unlike Setoguchi- most of Jets poorer skilled players are still signed to contracts. Setoguchi could still perform well on a easy minutes third line, but likely that is all.

Bonus: This wasn't a surprise. At. All.

It's funny thing how we can look at statistical predictions, which many will (or have) argue against, but then no one will admit that they didn't foresee the future when it occurs differently than what they expected.

This job was foreseeable. Someone should have shown these numbers to the Jets pro-scouting squad. There are even better and more damning numbers that this would occur. Yet, many laughed at the early season prediction of Michael Frolik passing Setoguchi.

That's okay. I'm sure most fans, scouts, management, and media have learnt their lesson.