There's something said about the way a coach divvies out his time on ice. What does it say for the Jets?

Share All sharing options for: The Peculiar Case of Jets Forward TOI

Over at AIH's Pilot's Logbook series, you may have noticed something odd about the Corsi% graphs for the Winnipeg Jets forwards. So far, all five of Michael Frolik, Olli Jokinen, Evander Kane, Andrew Ladd and Bryan Little have been compared to first line forwards. You would also be right in guessing that both Mark Scheifele and Blake Wheeler will be as well.

What's the deal with that?

Over at Hockey Graphs, I have been slowly building a large database for players results by TOI. I published some of my early findings in the article More on Corsi & Context (click the link to see method).

The analysis goes further, but here are the results at that point which is all that matters for today:

The table gives the general sense of how the NHL divides it's players 5v5 TOI. The top graph has every NHL forward season between 2007-2012, which was ordered by TOI and then split into 4 equal groups of games played. The lower graph then further separates the 4th line into two groups, again by games played.

From that information, one can determine the normal ypical distribution of TOI for players according to which line they are predominately situated on:

So, how did the Jets TOI compare to this?

Let's take a look at the Jets' forwards for 5v5 TOI. 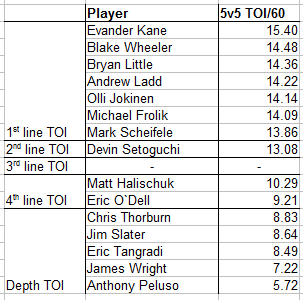 The Jets did not fall within the norm for TOI distribution. Whether be it from an underwhelming bottom six, or an overly impressive top 6, the Jets coaches seemed to have two very distinct pools of forwards.

Here is a visual representation, showing the steep cliff after Devin Setoguchi: 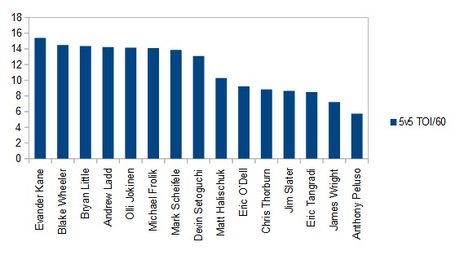 Underlying numbers indicate that some of these players probably should have had more icetime, while others probably should have had less. Whether this type of TOI distribution was the right or wrong decision for the Jets depends on a lot of other factors as well. For example, it is muddied by injuries, although all teams face injuries. Still, the trends are extremely insightful on how the Jets depth is viewed.

This isn't the norm for even the Jets either. The 2013-14 season is different from the previous two seasons. 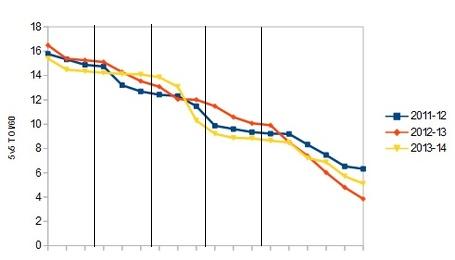 I find this graph quite fascinating.

This pre-season, I questioned the Jets forward depth and postulated that 2012-13 was the best for bottom 6, with Nik Antropov, Alexander Burmistrov, Kyle Wellwood, Mike Santorelli and Eric Tangradi playing regular minutes on the third line.

With players like Olli Jokinen, Matt Halischuk, James Wright, Devin Setoguchi and Chris Thorburn turning into free agents this season, the Jets top players signed long term, and the cap rising extensively, Kevin Cheveldayoff will have a lot of freedom in improving the team's bottom players.