Share All sharing options for: Pilots Logbook 2013-14: Andrew is a Good Ladd

Winnipeg Jets captain Andrew Ladd had another strong year despite not matching his point production pace from the lockout shortened season. He remains a big part of the team's defensive conscience and largely leads by example with his play.

Twenty three goals in seventy eight games marks a slight downturn in Ladd's goal production, but his assist totals were on par with his last few seasons. Ladd remains in his scoring prime, but is unlikely to replicate the kind of production he hit in the lockout shortened season.

Ladd faced tough zone starts for a scorer and he continued to log big minutes across all situations. Ladd (along with Little) consistently faced the team's toughest matuch-ups and usually came out ahead. He also benefited from playing with the Jets' best players, but that is what happens when you are a top line forward. 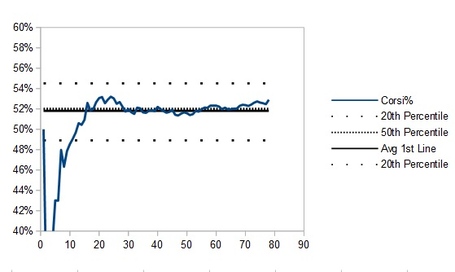 Corsi is plus. relCorsi is plus. dCorsi for and against both point in the right direction. dCorsi percentage is a massive plus. What does it all mean? It means Andrew Ladd is very good and all in very responsible defensively. He plays the toughest minutes on the team and carries the team into the black. Coach Paul Maurice saw this and it led to him flanking Bryan Little with the team's best two way wingers (Andrew Ladd and Michael Frolik). It will be interesting to watch Ladd's deployment in the future. Will be become more of a defensive specialist? How long will the scoring last.

Andrew Ladd remains one of the Jets' best players. Even with decreased production, Ladd fills a valuable role on the team. Ladd is a quality 200 foot player that could play in the top 6 of pretty well any team in the league.

He is on a team friendly contract and he is the captain. The Jets will keep him as long as he is willing to stay. One has to wonder though - will he want to stay long term if the Jets continue to miss the playoffs? Chevy can't talk extension for a year yet, but he will have to broach the issue as soon as the CBA allows.

Despite the nonsense spewed by some of the NHL media's talking heads - looking at you Joe Haggerty - Andrew Ladd would not be a third line winger on a playoff team. That is complete and utter garbage. As Garret mentioned in the Evander Kane Pilot Log, Ladd has been among the top goal scorers in the league over the last three seasons. Well, Ladd has been a top point producer too.

Over the last three seasons Ladd is 49th in NHL point production. Ladd very clearly produces like a first liner and much like Kane, he excels at 5 on 5. As Garret stated Ladd ranks 15th in goals over that period.

If we narrow the field exclusively to left wingers over the last three seasons; Ladd ranks 10th in points, 9th in total goals and 3rd in even strength goal scoring. That doesn't look like third line production to me and he does it all without any lags in his defensive play. Ladd is good.