Why I would fear a Mike Richards signing

Mike Richards is not what the Jets need and there is good reasoning in being afraid of picking him up.

Share All sharing options for: Why I would fear a Mike Richards signing

Earlier today in the Winnipeg Free Press, Gary Lawless stated: Mike Richards is exactly what the Winnipeg Jets need. As many of you know, I have appeared on Lawless' show before and we do have mutual respect each others opinions, even though we do not often agree.

This is one of those times. Gary, I respect your opinion but disagree.

Lawless supposes that a big factor in Jets losing is that they have too many players who are pushed out of games.

I have a largely contrarian opinion: the Jets don't have enough good players and get out chanced, and a goalie that makes everything worse by letting in more goals against per chance than average.

Let's compare the current Jets roster to last years Stanley Cup winners Chicago Blackhawks (we won't do the Kings since that Richards' team although the results are the same):

There is a lot more blue on the team on the right; a lot more players with positive possession. In fact, all of the Blackhawks are outside of the red zone. You'll find similar trends in New York Rangers, St Louis Blues, Los Angeles Kings, Boston Bruins and San Jose Sharks... ie: the best teams.

There is no doubt Richards would be better than Matt Halischuk, Jim Slater, Chris Thorburn, or the many other replacement level players to rotate on the Jets bottom lines. However, there are two reasons to doubt why Richards would be an wise acquisition.

While Richards does sport a positive Corsi%, he has played on a team that has dominated the league. The Kings have been one of the best possession franchises in shot-metric history. 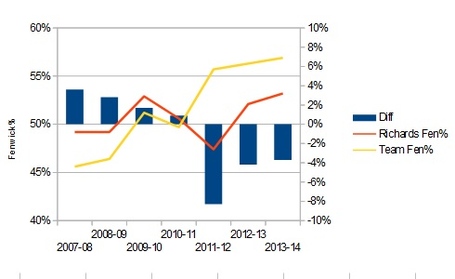 This is strong evidence that the Kings' rise has masked Richards steeply descending ageing curve. Something the Jets would unlikely be able to do as a more middle-of-the-road possession team.

Now these numbers don't take into account usage, so one could argue that perhaps Richards is taking tougher assignments which is harming his two-way results.

But, dCorsi -a regression that compares a player's Corsi to what is expected given similar usage- indicates Richards creates shot volume at an okay rate, but has struggled with suppression... while playing on an elite shot suppression team. Overall, Richards has posted a Corsi% well below that expected given his usage and quality of teammates for the past 4 seasons. Around Devin Setoguchi level numbers.

In addition, Richards has slowly become more and more dependent on the power play for producing points. Over the last 3 seasons combined, Richards has averaged 1.35 points per 60 minutes of TOI. That's around the same rate as Olli Jokinen, Alexander Burmistrov and Devin Setoguchi over the same sample.

The Jets likely have 5 forward spots taken on the power play between Blake Wheeler, Andrew Ladd, Evander Kane, Mark Scheifele and Bryan Little. If Richards was not to receive power play time like with the Kings, we should expect a steep decline in his point totals.

These two statistics are the same ones that gave AIH confidence in the Michael Frolik acquisition and fear with the Devin Setoguchi signing.

Now these facts may be all fine depending on what is expected of Richards.

Lawless stated it would likely take 4+ million over three seasons, maybe more depending on bidding wars, to purchase Richards if he were bought out.

A 4 million dollar price tag for a declining asset makes the best case scenario that Richards earns his contract, with a very unlikely chance that he gives plus value. Typically in free agency you are unlikely to win a signing for top available players, especially when they are packaged with "intangibles" and "winning pedigree". The best signings tends to come from attacking market inefficiencies, players that are not always heralded but have a positive impact to the game. The Kyle Wellwood's and Benoit Pouliot's.

Richards by no means is a bad player and would be far from the worst player on the Jets. There is however strong evidence that the signing would end up with similar results as Olli Jokinen and Devin Setoguchi; an ageing forward who gets out shot and chanced when on the ice, struggles to score off the power play, and comes with a pretty decent cap hit.

While character, grit, pedigree, etc. are all nice intangibles, it is the tangibles that have the largest impact on winning, the outcome that is desired. Intangibles should be used as a bonus when evaluating players, not a major piece.

If the Jets somehow signed Richards in the 2-3 million AAV rate, this could be a signing that improves the Jets. If not, they may do better looking elsewhere.