Losers, winners, and meaningfulness in plus/minus

Sometimes emphasis is placed on players who lead their team in plus/minus for the season. Is that meaningful?

Share All sharing options for: Losers, winners, and meaningfulness in plus/minus

Every once in a while, particular comments will pop-up in regards to plus/minus:

Goal percentage (goals for / all goal events) is slightly better than raw plus/minus, in that it can differentiate the difference between -20/+10 and -30/+20 and having different amounts of TOI.

Here is each defender's team ranking in 5v5 goal% of the top 7 leaders in TOI for the Atlanta Thrashers and Winnipeg Jets. 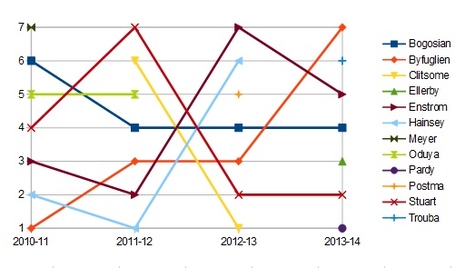 You can see that almost every player with multiple seasons has ranked near the top and bottom.

As Gabriel Desjardins -founder of Behind The Net, which eventually evolved into Arctic Ice Hockey- once said:

Someone asked friend of the blog Neil Greenberg how reliable individual +/- is. I think it's very reliable - in fact, you would do reasonably well signing the player who finishes dead last in the league in +/- every season provided he wasn't on an expansion team.