We have arrived at the individual player performances section of the series. We will move from back to front, starting with goaltenders and ending with forwards with each in alphabetical order of surname.

Arctic Ice Hockey's thoughts on Winnipeg Jets starter Ondrej Pavelec is no secret. We have often gone beyond save percentage to show in depth the performance of the Czech netminder, as well as why he owns his numbers:

And there is this great piece over at Jets Nation: Goaltender Performance. Our friends break down every goal against for both Ondrej Pavelec and Al Montoya.

All numbers are from extraskater.com and rankings are out of 59 goaltenders who saw at least 25% of their team's games (ie: 21+ games played).

Prior to being injured, Pavelec was again on pace for being one of the top in games played for goaltenders. The netminder finished the season with a 0.901 save percentage, just .001 above replacement level. While Pavelec is not a starter calibre goaltender, this is probably below Pavelec's "true skill level" and he is likely to bounce back a bit the next season.

Pavelec did face a decently sized shot-attempt volume (CA/60), although the Jets were able to defend well enough to mitigate it a bit as shown by the drop in rank with non-blocked shot attempts (FA/60) and shots on goal (SA/60). 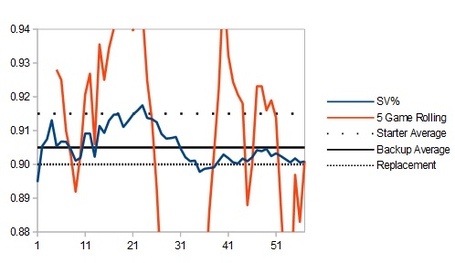 Pavelec actually pulled his save percentage above starter average at one point, a first for him as a Jet. His success was short-lived, as the numbers eventually came crashing down. Midway through the season Pavelec had his worst 10 game stint of his entire duration as a Jet. Interestingly enough, Claude Noel was fired after the 10th game.

Pavelec's performance as a Jet 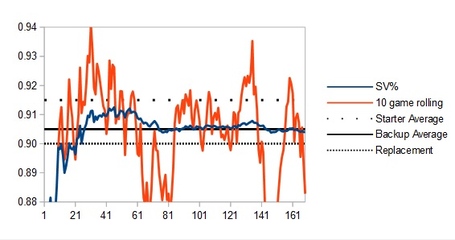 You can see here how Pavelec's MVP season was different than the next year even though his final save percentages were only 0.001 apart. In 2011-12 Pavelec had multiple 10 game sets where he was above starter average. By the end of the season though he had a large collapse that pulled down his seasonal numbers and hurt the Jets' final playoff push.

In 2012-13, Pavelec started poorly, but eventually worked his way back up to where he was pretty consistently between replacement level and starter average.

Then came this season. Pavelec started well, had a huge collapse, then played well for a few games under Maurice, and then collapsed again.

Ondrej Pavelec has been trending towards the level of an average backup throughout the duration of his career in Winnipeg. He has not performed adequately for his position in the depth charts, nor for his paygrade.

Unless the Jets become a top 5 team, they will either need Pavelec spontaneously become a different goaltender or find someone new... and that's just to sneak into the playoffs. The goaltending market is extremely inefficient and can be exploited, but currently Pavelec's contract is blocking the Jets from this. 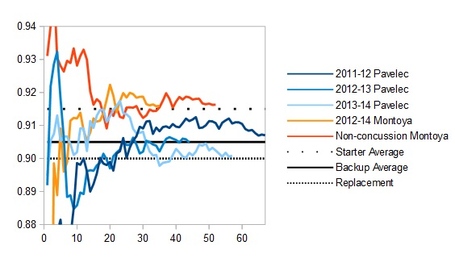 The save percentage values are cumulative, meaning as you move right, you improve the sample's accuracy. The non-concussion Montoya is simply 2012-14 Montoya with games played 2011-12 prior to his concussion added. There are definitely two noticeable trends here.

Montoya may not be the Jets saviour, but there is little doubt the backup netminder outplayed the starter.