Last summer Arctic Ice Hockey pointed out that choices made by Claude Noel may have cost the Winnipeg Jets about 2-5 wins in the 2012-13 season. The next season saw Noel struggling yet again, eventually leading to his dismissal and the hiring of Paul Maurice.

The Jets came out strong after the employment of Maurice, going 11-3-2 in their first 16 games. This lead to some individuals to sing high praises of the Jets new found commitment to compete under the guidance of their new master. However, the parade failed to materialize when the Jets fell 7-9-3 for the final 18 games.

So, was there a real difference or was the start just the brilliance of the Emperor's new clothes? 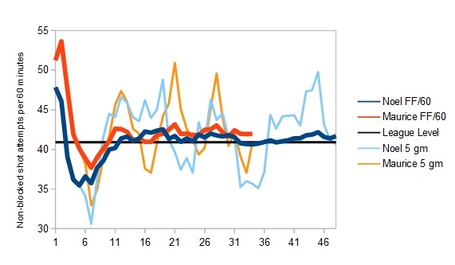 There's not a significant difference here. For the most part, the Jets were fairly similar in their shot generation under both coaches. 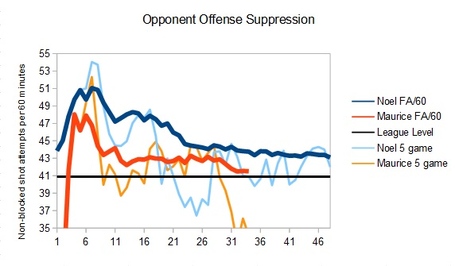 There is a significant difference here. Both coaches improved their team's shot suppression over the duration of their tenure; however, Maurice was superior in this regards. 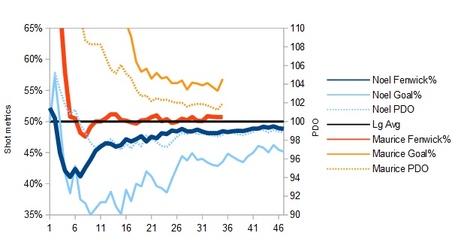 The difference between the thin lines (Goal%) displays the differences between the two coaches in outputs, which is driven by a combination of luck and inputs. This is often what drives the mass "layman" public-opinion and even media at times.

The dotted lines (PDO) predominately measures luck and will regress to the mean over time, although teams with high or low end goaltending will push a team's mean above or below the league's mean. The major difference in the Jets PDO under Maurice and Noel was in shooting percentage, and therefore even less likely to be sustainable.

The thicker line marks the skaters' input into their goal differential, and more likely the true difference between the two teams. This may not seem like much but given that this is using the same players and 1/5th the NHL spread, the difference is relatively large. 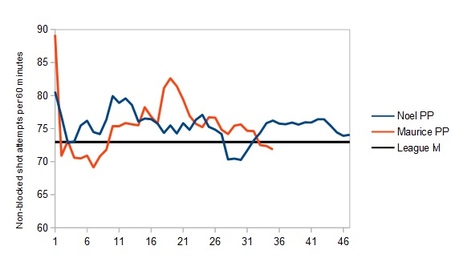 Special team situations are small samples highly influenced by the natural variance of shooting percentages. It has been shown previously that a team's ability to create non-blocked shot volume on the power play is the most predictive of future power play success, when success is measured by future goals per minute.

There isn't much difference between the two at this point, although Noel has the added benefit of having a training camp to instil his system while Maurice was teaching on the fly. How the team's power play will perform in the seasons to come relative to their time under Noel could go either way, or not even change at all. 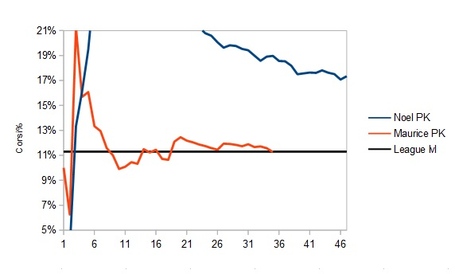 The metric chosen is once again the one that best predicted future success, with this time goals against per minute being the measure of future success. This is not 100% accurate though as there is another measure that is near equally predictive of future success: PK save percentage; however, save percentage is predominately a goalie statistic and is influenced very minimally by team and system... besides, they had the same goalies to choose from.

Here is one where Noel gets the upper hand on Maurice. Of course, there is a possibility that other factors could play a role. In the later parts of the season, more players were injured. Also, the lack of a training camp could also play a role. Still, it currently stands that Noel was superior in Maurice here.

In fact, Noel was off the charts for much of the season, even though the PK was regressing. Here is the chart zoomed out beyond the typical NHL spread: 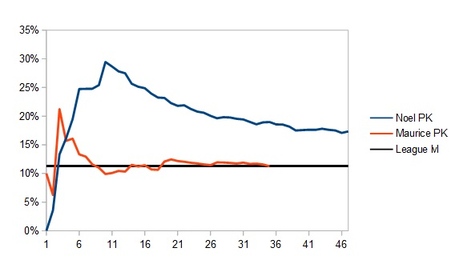 Whether these patterns persist in the next season will be interesting to see. Another area to watch out for next season will be player management. Will Maurice make the same errors that ultimately ended Noel? Will he ride an inferior starter who is being out-performed by the backup? Will he give minutes to the "safe" Olli Jokinens and Chris Thorburns over the more positive on-ice influencing Kyle Wellwoods and Alexander Burmistrovs.

Only time will tell.