Paul Postma's shortened season is tough to gauge by the numbers. From the start Postma struggled to find a rhythm. He was in and out of the lineup early. In October he played the opening two games, then sat three, then played two, then sat one, then played four. Then news came out with a blood clot and he was shutdown until February.

Postma just made the games played threshold to be evaluated in the Pilot's Logbook series, with the cutoff being at twenty games. His counting statistics are low, especially for someone considered an offensive defenseman. His points relative to ice time was 6th, falling behind Dustin Byfuglien, Jacob Trouba, Grant Clitsome, Tobias Enstrom and Mark Stuart(!). However, Postma did this with a 5.5 on-ice shooting percentage, which is about 2.4 less than what the average third pair defenseman experiences.

Paul Postma was given a huge offensive zone push against weaker competition, this is idea when a coach wants to optimize a player with Postma's strengths and weaknesses. On the other hand, Postma's quality of teammates and power play time were less than optimal. Postma played with the Jets top players less often than any defender not named Adam Pardy. This probably played a major role in Postma's low on-ice shooting percentage. Postma also placed 6th in power play ice time, an odd usage choice given that Postma is essentially a power play specialist and has the Jets second best 5v4 points per minute. 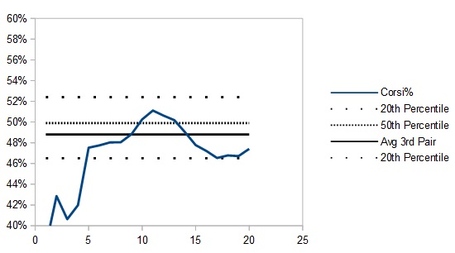 Postma's underlying numbers were all over the place on the graph. From terrible, to exceptional, and then settling to below average. Of course, even the fanciest of stats need sufficient sample size.

To give a more realistic picture of Postma's abilities we can look at both of his seasons combined: 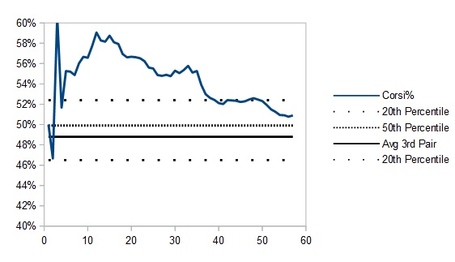 From here we see what we would expect: when Postma is given an offensive zone push against the other team's weaker lines, the Jets out-shoot their opponents at an impressive margin. Sounds familiar? Like a certain Grant Clitsome?

Paul Postma is a good power play defenseman that wasn't used on the power play. He suffered through injuries and inconsistencies, which led to him only playing twenty games.

Paul Postma and Grant Clitsome are two defenseman that can excel given cushy minutes in the offensive zone. Unfortunately though the Jets do not have to many soft minutes to give out with the only having three legitimate top 4 defenseman (well four if you count Byfuglien and force someone on their offside).

As mentioned earlier, it was noted that Postma and Clitsome are similar players, in where they can play relatively big minutes for a 3rd pair, as long as they get a decent offensive zone push. When the Jets have had the two together, they Jets have directed 53.3% which put's them in the top 20% of 3rd pair defenders. On average, that Corsi% gives a team a +3 goal differential better than an average third pair (or about +12 better than the bottom 5%).

Essentially, the two are an optimal third pair. The problem is the Jets bottom pair depth is starting to become log-jammed - and it may be for a while now that Clitsome and Stuart have been extended. This is why I believe the Jets should have let Stuart walk.