Adam Pardy got the tap on the shoulder for his first Winnipeg Jets game on October 20, after Jacob Trouba suffered neck and facial injuries in the preceding game. Jets fans were apprehensive at the thought of Pardy stepping in to replace Trouba for an unknown period of time. Trouba was already showing great instincts and an ability to consistently move the puck. How would the Jets manage, with what seemed to be a lack of depth on defense?

Adam Pardy didn't exactly set the house on fire for the Winnipeg Jets in 2013-14, with just 6 assists in 60 games. But, he proved to be a reliable third-pairing defenseman for the most part and ice time was allocated accordingly.

Despite early apprehensions, Adam Pardy stepped up - without fanfare, but also without too many mistakes. He performed competently, while facing the opposition's less talented forwards and given a substantial offensive zone deployment boost. Coaches clearly didn't consider him a world beater, but he was given a regular third pairing shift. 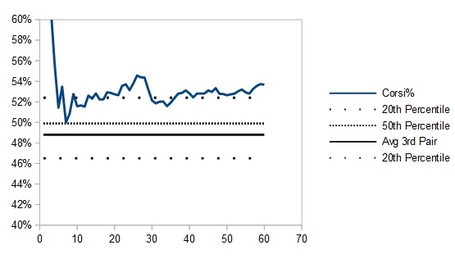 For the people that groove on advanced stats, the following data supports the viewed that Pardy acquitted himself relatively well against weaker opponents. As you can see, he had a positive relCorsi rating. This means that the Jets directed more shots at the opposing net than they allowed on their own net with Pardy on the ice than when he was on the bench. So, Pardy didn't hurt the Jets, generally speaking, despite a relatively low amount of offensive production.

The exciting part of the story for Pardy is what he did in the last segment of the season. In the last 20 games, we discovered some new Pardy "dangles"! This seemed to reflect Pardy's growing confidence as a Jet, and coincided with an increase in his ice time over the last 20 games (15.8 minute average, including a 17.4 minute average in the final 10 games). As shown in the above graph, his numbers were above average for a third pairing defender hard to ask for more from a guy who started the season in St. John's.

Pardy's performance over his last 20 games gives Jets fans some legitimate hope for a solid 2014-15 contribution if re-signed. Although he sometimes shows flashes of offensive talent, he is primarily a solid third-pairing defenseman.

Keep. I feel confident that Adam Pardy can get the job done. Whether he starts the season on the third pairing, or - more likely - is an extra "depth" defenseman, he has proven himself worthy of a look. Should he be kept over a younger prospect who perhaps has more upside? That is where things get tough.

Bonus Section: Could It Be Anything Else?