(The following article has been written by two! different authors: Truck and garret9. Enjoy!)

Truck: Tobias Enstrom is an interesting defender and the source of much debate in Winnipeg. He is diminutive in stature and can struggle in the net front region, but he is a top end player whent the puck is on his stick. The numbers have long supported that he good heavily outweighs the bad. Did that continue through the 2013-14 season?

Truck: Eight two games played! 82! At the end of last season people were saying this was impossible. Ha! The rest of the numbers are nice (30 points was top 50 among NHL defenders), but not spectacular. Toby's thirty points actually mark a career worst total for a non lockout season. Toby's average ice time was the second highest of his career, and topped all Jets this season.

garret9: Did you notice that Enstrom played 82 games?

Truck: Toby played the toughest minutes among the blue bubbles on the player usage chart. Blue is good.

garret9: Enstrom played the toughest minutes yet of his career while being based out of Winnipeg. He matched up against other team's top lines more often than any other year. He started his shift in the defensive zone more often than normal and slightly less than the team average. He played with the Jets top players often, although actually less than the past two seasons. 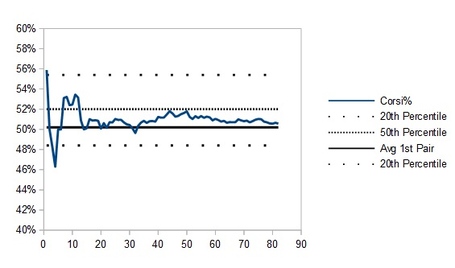 garret9: As Truck mentioned in the last section, Enstrom played the toughest minutes of all the Jets defenders who successfully helped their team out-shoot their opponent. If all the Jets players were like this, the team would likely be in the playoffs despite Ondrej Pavelec. The dCorsi numbers say something interesting; they suggest that Enstrom improved the Jets by supressing the other team, not by improving the Jets offense. Toby the defensive defenseman.

garret9: Tobias Enstrom is the Jets highest paid defenseman and probably the most underrated defenseman by the fan base. How often do those coincide?

garret9: Enstrom is signed long term with a non-movement contract. That alone suggests he is unlikely to be moved. If that wasn't enough, the Jets left-shooting defensive depth currently signed for 2014-15 goes as follows: Tobias Enstrom, (large hole), Grant Clitsome, Mark Stuart, Julian Melchiori... You can add Josh Morrissey if he makes it to the show next year.

This season was officially Enstrom's worst offensive season. He posted his lowest points per minute of his entire career. So what happened?

All numbers are for 5v5.

Enstrom looks almost identical to every previous season except in one area: assists. He's generating nearly identical shot volume and goals, but his assists (the major source of Enstrom's usual point production) are severely down.

All numbers are for 5v5. Byfuglien's numbers include when Byfuglien was a forward.

You may see a pattern, where Enstrom tends to score more when he spends more time in the other team's offensive zone. Surprise, surprise (not really).

There is also the pattern that Enstrom struggled to create offense with guys who struggled in their shooting percentage. Bogosian's offensive production woes this past season have been well documented. Postma and Ellerby also shot at 0% with Enstrom on the ice.

Aside: I was not able to spearate Enstrom's numbers with Byfuglien the defenseman from Byfuglien the forward; however, I can provide the next best thing with the previous two seasons with Big Buff: